CSB graduate to continue passion for stories in Hamburg 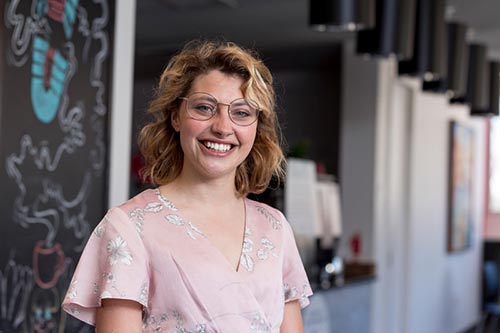 Editor's Note: This feature story on Danica Simonet ’19 is the second of six feature stories that will appear this summer on the College of Saint Benedict and Saint John’s University website featuring graduates who received awards from the Fulbright U.S. Student Program.

When it comes to telling stories and bringing another culture to life, College of Saint Benedict graduate Danica Simonet ’19 has extensive experience.

The peace studies and German double-major from Northfield, Minnesota, has traveled to Germany multiple times in recent years to interview refugees and bring their experiences to light.

This year, she served as co-director of Extending the Link (ETL), a group on the CSB and Saint John’s University campuses that creates documentaries about under-told social justice issues. She helped lead the production of “Bayt Jadeed: Seeking Home,” the group’s latest documentary film focusing on refugees and receiving communities living in Germany and Minnesota.

Simonet will now get the opportunity to travel to Germany once again, this time as part of the Fulbright U.S. Student Program to be an English Teaching Assistant (ETA) in the city of Hamburg.

After globe-trotting with ETL, it wasn’t a straightforward choice for Simonet to decide where to go next.

“I am interested in learning Arabic, so my initial thought was to go to a Middle-Eastern country,” she said “Jordan was prioritized on my list. However, I thought most applicants would already be Arabic speakers, so I decided to take another route. I also considered applying to Malaysia. Ultimately, I decided on Germany to improve my language abilities and to continue research on topics of interest for myself, such as migration, integration, and community.

“Because I have been to Germany multiple times, I hope to continue with the work I was a part of with Extending the Link and the interviews I completed with Syrian women in Berlin during the summer of 2016,” she said.

“I am most looking forward to getting to know my students, searching out graduate programs in Germany related to conflict transformation and human rights, as well as experiencing the culture of Hamburg.”

The port city of Hamburg is the second-largest city in Germany and is in the northwestern part of the country. Hamburg is a fitting destination, as it has its own history with migration. Many German-Americans’ ancestors passed through it on their way to the United States and the city is home to people of many diverse backgrounds. It is well-known for its shipping industry, long history and rich cultural scene.

Simonet plans to take full advantage of this.

“I hope to experience all that Hamburg has to offer - the theater, the music scene, the political scene and attend many lectures in Hamburg,” she said.

Simonet also intends to inspire her students with what she’s learned in ETL.

“I am hoping to bring ETL into the classroom, by encouraging students to become more aware of under-told social justice issues in their communities. I also hope to bring the joy of film and film editing — though I am still learning myself — to my students. I want my students to understand that they can experience the world through multiple lenses,” Simonet said.

In addition, she hopes to become fully fluent in German by the end of her year, and travel to eastern Europe to learn more about that part of the world.

Simonet will begin orientation in Germany on Sept. 9.

“This award is important to me because I believe in international culture exchange and this award allows me to be integrated into German society. Additionally, I believe learning about new languages are gateways into new worldviews and also allow people to be connected to the globalized world”, Simonet said.

CSB and SJU students interested in applying for a Fulbright Award for the 2020-21 academic year should contact Phil Kronebusch, professor of political science and coordinator of competitive fellowships at CSB and SJU, or Lindsey Gutsch, Program Coordinator for Undergraduate Research, Competitive Fellowships and First-Year Experience.