Editor’s note: This feature story on Regan Dolezal ’22 is the fifth of six that will appear this summer about College of Saint Benedict and Saint John’s University graduates who have received awards from the Fulbright U.S. Student Program.

Regan Dolezal ’22 wants to work in international diplomacy, and she’s not waiting for a post with the U.S. State Department to make that happen.

While earning her political science degree at the College of Saint Benedict, she helped film a documentary in Peru. She once had breakfast with the former president of Colombia and, for the past year, volunteered with a nonprofit that pairs Ukrainian youth with English-speaking tutors.

“I was matched with a guy named Igor, who is about my age,” Dolezal said. “I would Zoom him a couple times a week, and we would talk for about an hour. I would help him with grammar or pronunciation. We became friends and I’m still in contact with him, which is really significant given everything (surrounding the war) in Ukraine. Fortunately, he lives in the western part of the country, so he wasn’t directly impacted right away. But he’s in his early 20s and male, so he’s going to be impacted by it.”

Dolezal parlayed her international experience – including a semester abroad in Greece – with a host of glowing on-campus credentials into an invitation to be a Fulbright U.S. Student for 2022-23. She’s one of six CSB and Saint John’s University graduates to get a Fulbright opportunity this year as part of the flagship international educational exchange program sponsored by the State Department to foster relations between the United States and other countries.

Unlike some other Fulbrighters, Dolezal will embark to a part of the world where she doesn’t yet know the language. She leaves in August for the Czech Republic, which has received more than half a million Ukrainian refugees in the last six months, to be an English Teaching Assistant (ETA) at the European Business Academy in Děčín, a city of about 47,000 people north of Prague along the border of Germany.

“Luckily, I took German all through high school,” said Dolezal, who minored in global business leadership and was selected to give this year’s student commencement address. “I’m hoping people will speak a little German because I can hang in there with that. But in talking to ETAs who have been there, they’ve told me the best thing you can do is come in with a bit of language. So, I’m going to work online and try to pick up as much as I can. I’m going to watch Czech TV shows just so I can start to hear it. It’s not an easy language.”

Even before she was a sophomore in college, Dolezal set a goal for trying to become a Fulbrighter. Her adviser, Pedro dos Santos, associate professor of political science, by then already assumed she would apply – more than two years before she did so. She credits his support, and that of Professor Phil Kronebusch, coordinator of competitive fellowships at CSB and SJU, with helping her craft a competitive application.

Also coming in handy were her experiences as a CSB Student Senator, as a videographer for Extending the Link, as an Admissions tour guide, and as co-host of a podcast through the McCarthy Center called “I'm Glad You Asked.”

“A big portion of Fulbright is making a case for why you’re selecting that country,” Dolezal said. “You have to sell your plan. My dad’s side of our family has a Czech background, so that made some sense, and my experience tutoring helped. And each Fulbright program has more specific requirements as to whether you can be in a town alone or whether you might be better placed in a group. The Czech Republic really lined up with a lot of what I was looking for.”

She will be in a cohort of 30 Fulbrighters in the country, but on her own in Děčín. That will help her decide whether living internationally is really what she wants to do.

Common interests in sports and media

Sport and media also are a big emphasis at the school where she’ll teach, and those mesh with her own interests and skill sets. She’s also discovered rock climbing is popular near Děčín and that’s another of her passions.

“I grew up playing sports and, when I think of what connected me in high school it was always that,” said Dolezal, who played tennis and was a Nordic skier and golfer. “My coaches and teammates were very important to me. From what it sounds like, the students (at the European Business Academy) are motivated to play sports. More than half of them do. You don’t need to speak a ton of the language to engage people in sports.”

Originally from Woodbury, she came to Saint Ben’s despite not wanting to invite comparisons with her mother, who is an alumna.

“I loved my four years,” said Dolezal, who joined several friends following graduation on a six-week tour of Europe. “It gave me every opportunity and I was surrounded by the right people who encouraged me. I have a younger brother who is going to be a freshman at Saint John’s this fall, and he’s sick of hearing from me about how he has no idea what he’s about to experience and how great it will be for him. I think very highly of Saint Ben’s.”

After she completes her Fulbright obligation, Dolezal may remain in Europe to pursue a graduate degree in public policy – at least in part because tuition there is comparatively inexpensive. Beyond that, she’s considering a move to Washington, D.C. to work a few years, perhaps at the State Department or on Capitol Hill. And law school is an eventual possibility, too.

But much hinges on her experience in the next 12 months.

“It’s a great opportunity – given to me because professors were looking out for me and friends were supporting me,” Dolezal said. “I will make the most of it. So, naturally, I want to turn around and do something when I come back, helping the country for giving me this chance. It’s not just a trip for me.”

CSB and SJU students interested in applying for a Fulbright Award for the 2023-24 academic year should contact Phil Kronebusch, professor of political science and coordinator of competitive fellowships at CSB and SJU, or Lindsey Gunnerson Gutsch, director 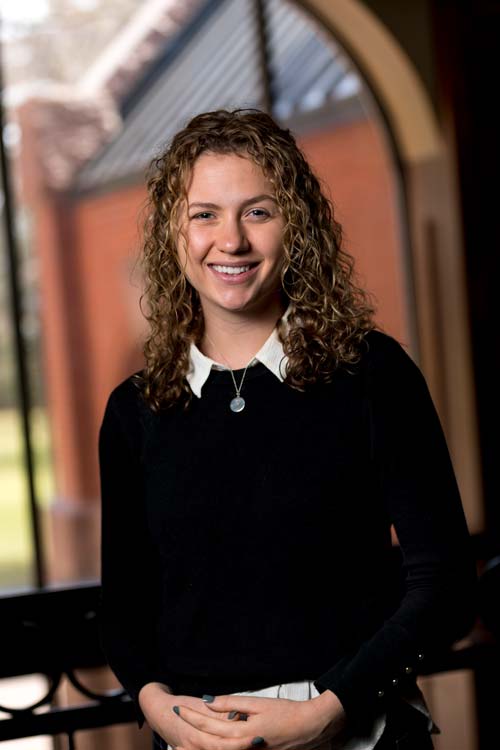