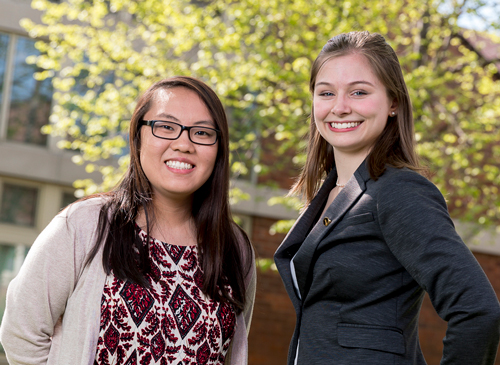 Two seniors from the College of Saint Benedict have received grants from the Fulbright U.S. Student Program, sponsored by the Department of State and the J. William Fulbright Foreign Scholarship Board.

In the last four years, 22 students or graduates from CSB and Saint John’s University have earned Fulbright ETA awards.

Merwin, an elementary education major from Isanti, Minnesota, felt she was a natural fit for the Taiwan program.

“I was in China (in the summer of 2015) so I had a draw toward the Taiwanese culture because it has a shared history,” Merwin said. “The Taiwan program also specifically works with elementary education students. Since I have a strong draw to work with young students, it fit best with who I am.”

When Merwin was in seventh grade, she had an exchange teacher from China live with her family for several months. That hooked her on Asian culture. When she enrolled at CSB, Merwin knew that “going abroad was on my bucket list.”

“I went abroad to Beijing in the summer of 2015 to teach English. It was awesome, and I wanted to do it again. So, Fulbright was a perfect fit,” Merwin said.

Vang, a political science major from St. Paul, Minnesota, studied abroad to China in fall 2015. Following the trip to China, she went to Vietnam and worked with Ethos, a non-governmental organization that worked with women and their children who had been forced into sex trafficking.

“I think China and Vietnam really changed my life – especially Vietnam,” Vang said. “After experiencing and talking and meeting with these groups, I realized that I wanted to help. I like helping people. I want to dedicate my life to public service.

The Fulbright Program, established in 1946, is the flagship international educational program sponsored by the U.S. government and is designed to increase mutual understanding between people of the U.S. and people of other countries.

Recipients of Fulbright grants are selected on the basis of academic or professional achievement, as well as demonstrated leadership potential in their fields. The program operates in over 160 countries.