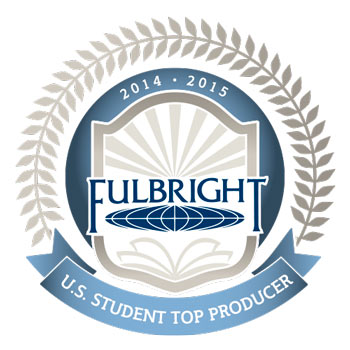 The College of Saint Benedict is among the top bachelor's institutions for producing the most Fulbright Students for 2014-15, according to a ranking released Thursday, Feb. 12, by the Institute of International Education for The Chronicle of Higher Education.

CSB is ranked 29th among bachelor's institutions for having the most Fulbright students. Last year, the college was awarded four Fulbright English Teaching Assistant (ETA) awards, the most the school has received in a single year.

Heather Beckius (currently an ETA in Brazil), Melissa DeOrio (Turkey) and Rachel Mullin (Malaysia) are 2014 graduates of CSB. Sarah Reisdorf (Brazil) was a 2013 graduate of CSB.

Beckius, an English major from Avon, Minnesota, hopes to obtain a graduate degree in speech pathology as a bilingual provider.

DeOrio, a political science major from Verona, Wisconsin, plans to use her Fulbright to gain more international experience. She previously worked for the SETA Foundation, a Turkish think tank, during an internship in 2013 in Washington, D.C.

Mullin, a history and political science double-major from Humboldt, South Dakota, made a study abroad trip to China, where her research project on the Chinese education system fueled her passion for the topic. Mullin also received a Truman Scholarship while attending CSB.

Reisdorf, who received a degree in Hispanic studies from CSB, took an English as a second language class her final semester, sparking her interest in pursuing work with English language learners.

The Fulbright Program, established in 1946, is the flagship international educational program sponsored by the U.S. government and is designed to increase mutual understanding between people of the U.S. and people of other countries. Recipients of Fulbright grants are selected on the basis of academic or professional achievement, as well as demonstrated leadership potential in their fields.