Some exciting changes are coming to Flynntown that will enhance the residential student experience on the Saint John’s University campus.

Beginning June 1, the Seton Apartment earth-sheltered homes will be demolished. Later this summer, construction will begin on the Flynntown Village Townhomes and the Stumpf Lake Pedestrian Bridge.

The entire project is expected to be completed in time for fall semester 2022 at a cost of $13.5 million.

A groundbreaking ceremony for the project is at 11 a.m. Wednesday, May 12 in the Seton Apartments area.

“The Flynntown Village Townhouses and the Stumpf Lake Pedestrian Bridge are exciting and transformative additions to the Saint John’s campus,” said SJU Interim President Eugene McAllister. “The townhouses will offer our students a house and a porch, a new place at Saint John’s. The bridge connects upper and lower campus, and will become another iconic image on a campus full of beauty and remarkable sights.”

“Part of the driving force here is for student recruitment and student experience,” said Russ Klein, facilities director at SJU. “When the word gets out that we have some really nice facilities, I think that word travels and helps with recruitment.”

“It will be new, and it does create something that we can market and show people we are investing in our program,” said Br. Dan Morgan, OSB, director of Residential Life and Housing at SJU.

“We’re in the process of starting housing selection right now for next year (2021-22), and it’s clear our juniors and seniors want apartment-style housing,” Morgan said. “A lot of the feedback we get from parents and students is they (the students) can do two years in the dorms, but they want apartment-style housing for their junior and senior years.”

The project will consist of two buildings totaling just over 45,300 square feet. Designed by BWBR Architects from the Twin Cities, the buildings will feature single bedrooms totaling 94 beds – an increase of 14 beds from the Seton Apartments – for junior and senior students. 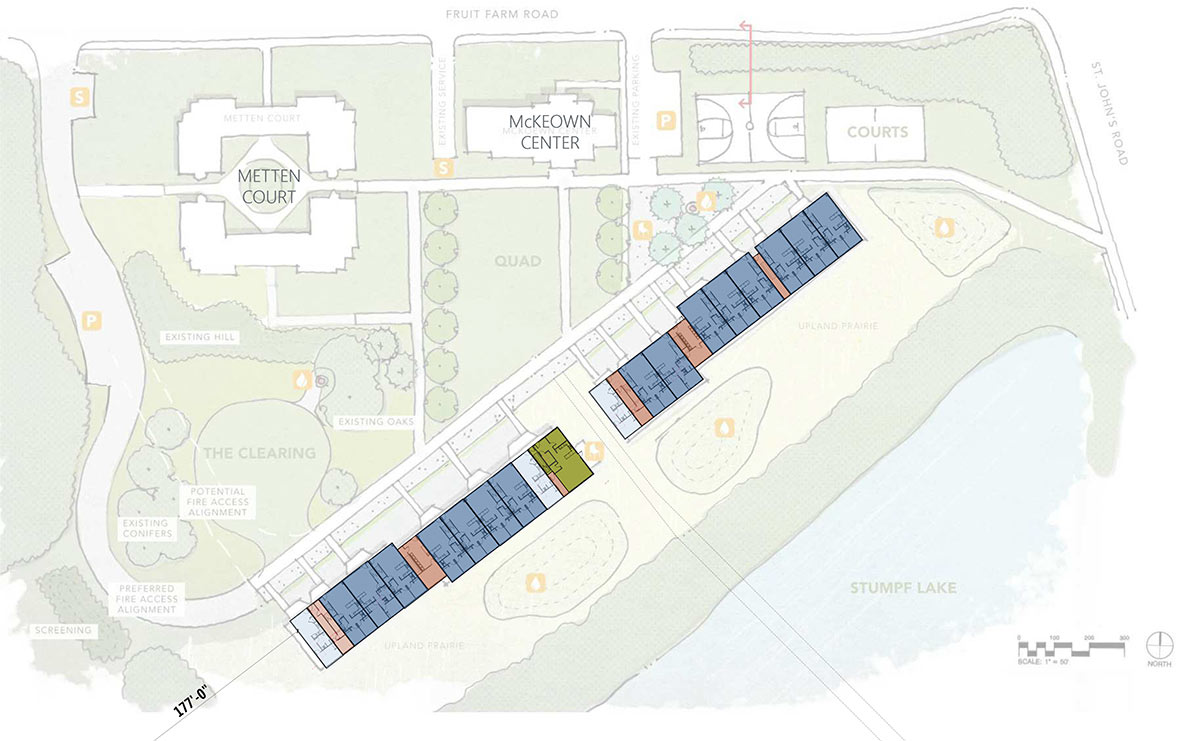 How the townhomes are situated on-site.

Most of the apartments in the complex will house six students. Each apartment will have a living room, small kitchen area and two bedrooms on the first floor, with four bedrooms on the second floor. There will be a ratio of one bathroom for every two students, and all units will be air-conditioned.

Within in each building, there is a community laundry and shared study room for group activity.

In addition to the six-man apartments, there will be select one-man apartments that will be compliant with the Americans with Disabilities Act and allow for students who suffer from food allergies or other medical or emotional needs to live alongside their friends.

“Right now, there isn’t any place in Flynntown for (a student) to live like that,” Morgan said.

The two new buildings will allow Residential Life to create “this village concept down in Flynntown,” Morgan said.

“The placement of the buildings is pretty much along the shoreline (of Stumpf Lake), or as close as the shoreline as we can get, which allows us to create a green space between where the building project will be and the McKeown Center,” Morgan said. “It kind of allows us to begin to maybe think about the McKeown Center a little bit differently, more as like the hub of a wheel.

“We have these different communities branched off in Flynntown, and we’re trying to bring them all together,” Morgan added. “We intentionally made it so all the doors in the new housing project will open toward that green space and toward the McKeown Center. It will create this idea where we can have people sitting out on their front porch and we could have a concert going on. It just allows us to think programmatically and maybe try to tie in some of that space and create some more vibrancy in the Flynntown community.”

In addition to the buildings, a new outdoor basketball court will be built adjacent to Fruit Farm Road and to the east of the McKeown Center.

The second part of the project is a pedestrian bridge that will span Stumpf Lake west of the current County Road 159 bridge. The work on the pedestrian bridge will actually begin following the demolition of the Seton Apartments, Klein said.

“The bridge is coming from a vendor (Wheeler Bridge Company) in the Twin Cities metro,” Klein said of the bridge, which is nearly the length of a football field (270 feet) and 12 feet wide. “It will be brought up here in five different pieces, and bolted together on the ground.”

Then, the excitement will begin, Klein said. Two massive cranes – a 900-ton Liebherr crane from Borsheim Crane Service in Fargo, North Dakota and a 500-ton crane - will pick up the bridge from opposite sides of the lake and place it on its abutments.

“It’s one of the largest cranes in the United States, and it will come here on 17 different semitrucks,” Klein said of the 900-ton crane. “The smaller crane will actually build the bigger crane.”

Klein estimates that it will take three days to build the larger crane, two days to set the bridge and three days to take the crane apart.

After the bridge is set, there’s still additional work to be done. A concrete deck will be poured over the bridge, and electrical work for lighting will be added. In addition, landscaping will be completed on the south (campus) side of the bridge.

Even though that work is expected to be completed by early October, the bridge will remain closed until the townhome project is completed.

“There were some safety components that went into (the bridge),” Klein said. “We’re trying to keep students from walking on County Road 159. Students and scholars at the Collegeville Institute naturally want to take the shortest pathway, and in the wintertime, that is walking across Stumpf Lake. Our top priority is the safety of our students.”

Morgan is excited about the pedestrian bridge creating an entry point for Flynntown.

“Right now, when you go into Flynntown, there isn’t a clear entry or exit (point). There’s nothing that really indicates like you’ve arrived,” Morgan said. “I think crossing over the pedestrian bridge, we can try to create that sort of feel when you’re walking into the courtyard, going toward the McKeown Center and then going wherever you want to go from there.”

The demolition of the Seton Apartments

After the SJU Commencement ceremony on May 16, Residential Life will give students two weeks to get out of the apartments. On June 1, contractor LS Black will set up the site fences and storm water pollution prevention devices, and then the demolition of the apartments and the home of former SJU football coach John Gagliardi and his family for over 50 years will take place.

There’s one unique aspect to the demolition, Klein said.

“We have to remove the trees, and then it’s your typical demolition,” Klein said. “We’ll be sorting the recyclables, the metals, and pulling that stuff away from the stuff that needs to go in a landfill. We’re going to recycle to the best of our ability during the demolition.”

Designed as earth-sheltered apartments by Hammel, Green and Abrahamson, the Elizabeth Ann Seton Apartments were constructed in 1981. There are five structures in all, each containing four four-person apartments. It was named for Elizabeth Ann Seton, the first American to be promoted to the sainthood.

None of the work is expected to cause closures on County Road 159 or Fruit Farm Road, Klein said. 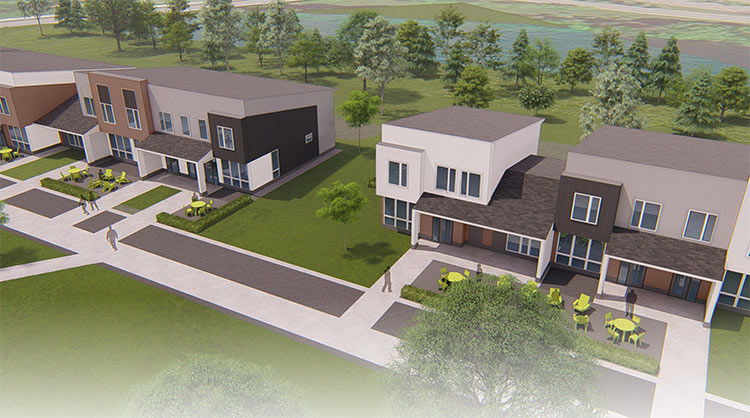 A closer look at the townhomes with the patios facing north. 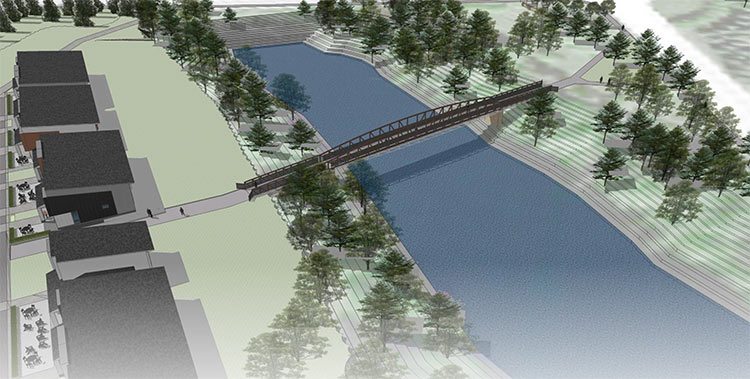 A look at the Stumpf Lake Pedestrian Bridge, with the townhomes on the left and the upper campus to the right. 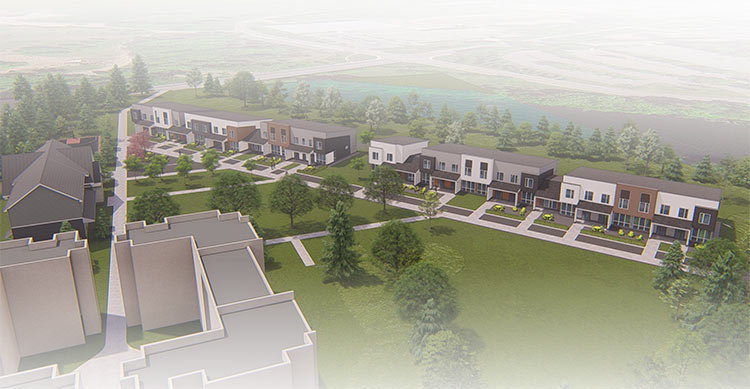 A look at the Flynntown Village Townhomes, with Stumpf Lake to the top of the frame and the McKeown Center and Metten Court to the left.