Festival of Cultures set for Nov. 2 at CSB 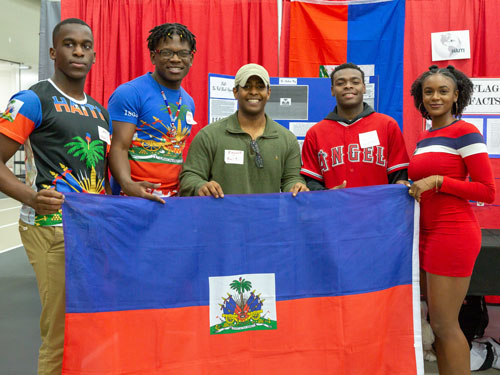 One word describes the 22nd annual Festival of Cultures at the College of Saint Benedict and Saint John’s University.

As in previous years, students from around the world and the United States will share their talents, food and cultures from 5-8 p.m. Saturday, Nov. 2, at Clemens Fieldhouse, CSB. The event is free and open to the public.

Students will share foods native to their countries and cultures from 5-6 p.m. at 32 booths set up around the fieldhouse.

“A group of students are specifically working on the performance, fashion show and the script,” said Brandyn Woodard, director of Intercultural and International Student Services at CSB and SJU, which is sponsoring the event.

“I’m excited about them. We’re going to see stuff that you haven’t seen before, performance-wise,” Woodard said. “We’re calling on students to share their talents with us. If the students aren’t really willing to share their talent, it’s more challenging for us to get folks to perform. But this year, it seems that we’ve got a lot of energy, so I’m excited.”

Woodard said the Festival of Cultures is a great place for people – especially first-year students new to CSB and SJU - to spend some time to discover a sense of where they are, a sense of place and a sense who they are neighbors with.

“This is an opportunity for many of our new students to be exposed to cultures that are not their own, in a more structured, sometimes even safer, definitely more convenient way,” Woodard said. “That hopefully piques their interest so that after the Festival of Cultures is over, they have a little more excitement to engage with something new.

“For example, if they are in their local town at home over Thanksgiving break, instead of saying ‘Let’s just go to McDonald’s,’ one of them - because of Festival of Cultures - says, ‘You know, I had this great Vietnamese food, maybe we should try this Vietnamese restaurant.’ It’s the whole idea of, I’m going to try something different, just because I had a good experience with it.”

Woodard added that there are many cultural clubs on campus – more than when FOC first began. Those clubs sponsor separate events throughout the school year.

“You’re able to see culture throughout the academic year,” Woodard said. “Festival of Cultures is just one part of it. I hope our community takes advantage of all the other opportunities and supports the students and the clubs that are putting on these other cultural events, because they’re sharing and saying please join us.”