Editor’s note: This feature story on Olayemi Fadahunsi ’18 is the third of six feature stories that will appear this summer on the College of Saint Benedict and Saint John’s University website featuring graduates who received awards from the Fulbright U.S. Student Program. 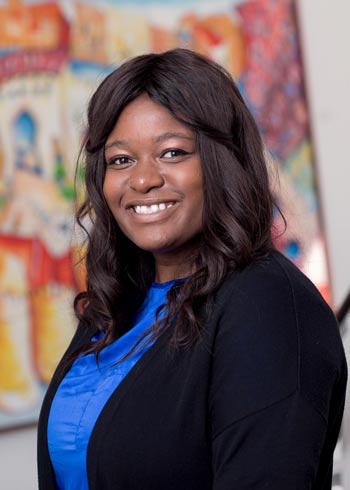 When her middle school classmates were watching “Toy Story 3” or “Despicable Me,” Olayemi Fadahunsi was viewing something completely different.

Movies such as “It Started with a Kiss” or “Devil Beside You.”

Don’t recognize those releases? They were popular Taiwanese movies – something Fadahunsi watched during her middle school years.

From those films, Fadahunsi took a keen interest to Taiwan. She continued that interest when she earned an award from the Fulbright U.S. Student Program, sponsored by the Department of State and the J. William Fulbright Foreign Scholarship Board as an English Teaching Assistant (ETA) in Taiwan.

“When I was in middle school, my friends and I would watch Taiwanese dramas – even though we had no knowledge of the language or the people, we still enjoyed watching the films.” said Fadahunsi, a 2018 graduate of the College of Saint Benedict with a degree in political science from Maplewood, Minnesota.

“From that experience, I have always had an interest in Taiwanese people, culture and language. When picking a country to apply for, I took the opportunity to select Taiwan, which will give me a chance to actually live in Taiwan rather than watching (actors) in a film,” she said.

Fadahunsi hopes to challenge herself when she leaves July 30 for the Taiwanese city of Kaohsiung to teach elementary and middle school students.

“I want to learn the language, eat the cuisine, build community and connect with my students to not only teach them, but also to learn from them,” Fadahunsi said.

“I am really looking forward to being fully integrated into a new culture for an entire year,” she continued. “I am also very excited to expand my knowledge of a new culture and language in addition to all the new places and experiences I will have.”

Fadahunsi said it is an honor to represent the United States overseas, and then continue diplomatic work in her professional career following her Fulbright award.

“My hope is to be in the field of international relations or foreign service, and I think this is a great step toward fulfilling my goals,” Fadahunsi said.