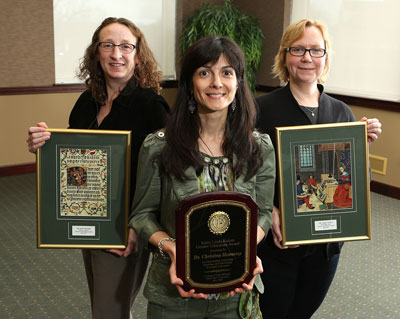 Faculty and staff members from the College of Saint Benedict and Saint John's University were honored at the Academic Affairs Awards and Recognition Ceremony May 12 at the Gorecki Center, CSB.

In addition to recognition for years of service, promotions, contributions as department chairs and leaders, the following awards were presented:

S. Mary, a noted biologist who was a 1933 graduate of CSB, served students at CSB and SJU for more than 35 years with intelligence, dedication and affection. The difference S. Mary made in her lifetime of teaching at CSB is celebrated through the recognition each year of a faculty member who represents the best teaching and learning at CSB and SJU. S. Mary served as president of CSB from 1963-68. This award has been presented yearly since 1995.

Siver, who has taught at CSB and SJU since 2010, has three goals as a teacher: build students' knowledge about international relations and comparative politics; develop their research, critical thinking and communication skills; and foster their identities as responsible young scholars. She has earned a reputation of being willing to spend enormous amounts of time one-on-one with students. Her passion for research and communication comes from participation in competitive debate. Siver has continued to be involved in debate at CSB and SJU, helping to form a speech and debate team, and also serves as the managing director of the Women's Debate Institute, a non-profit organization which runs a debate camp for high school girls. Siver believes debate builds confidence in students and the ability to civically disagree with others fosters discussion on important social questions.

This award is named in honor of Spaeth, who served as dean at SJU for nine years in addition to service as a professor of liberal studies from 1979 until his death in 1994. Each year, Spaeth's commitment to excellent teaching is remembered by honoring a faculty member who brings a special passion and mastery to the classroom and the learning community. This award has been presented yearly since 1995.

Graham, who has taught at CSB and SJU since 1995, encourages students in their development as scientists and people while striving to develop educational styles that are accessible to all students and maintaining high academic standards. She has led the development of workbooks for four introductory courses in chemistry, which include 2,000 pages of guided inquiry and problem-based learning activities. Together with Ed McIntee, associate professor of chemistry, Graham established the S-STEM FoCuS program with funding from the National Science Foundation to provide scholarships and infrastructure to support traditionally under-represented groups of students to major and succeed in chemistry. She has also guided 60 students in their research projects.

This award recognizes a member of the CSB and SJU faculty whose work has been especially important to gender education development. S. Linda, CSB's vice president for academic affairs from 1977-85 and a professor emerita of education, was a pioneer in the colleges' earliest efforts to integrate gender into the curriculum.

Hennessey, who has taught at CSB and SJU since 2002, has been actively involved in gender education since 2006. She has been a member of the advisory board for the Nancy Hynes Institute for Women's Leadership, and has developed and taught courses on gender issues in both the gender studies and Hispanic studies departments. In 2011, Hennessey published a book on Greek artist, feminist and activist Melina Mercouri, which is part of the "Women's Library" for Ediciones del Orto, Spain, which features the most important female figures in the world. Hennessey has also published six papers on gender topics, most recently on the 2001 economic crisis in Mexico and Argentina and its impact on gender inequalities and the lack of legal protection toward women.