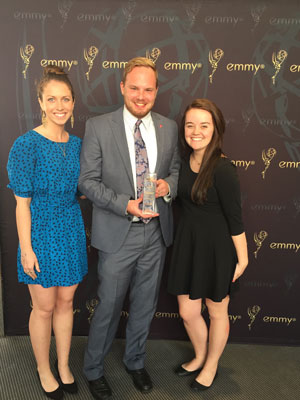 The non-profit, student-run venture at the College of Saint Benedict and Saint John's University was one of four student production teams who took home a Student Production Crystal Pillar Award from the Upper Midwest Emmy® Chapter/Foundation in the College Non-Fiction category April 12 at the Radisson Blu Hotel, Bloomington, Minnesota.

ETL was honored for "Ger Kler: A Journey of Untold Strength," which was produced in 2014. Three production teams from Wartburg College in Waverly, Iowa, captured the other three awards in the category, which had 11 nominees.

The event was presented by the NATAS. The Upper Midwest region consists of Minnesota, South Dakota, North Dakota, Iowa and western Wisconsin.

"Ger Kler: A Journey of Untold Strength," which was also presented at the Notre Dame Student Peace Conference March 27-28, tells the story of the Karen, refugees from the border between Thailand and Burma (also known as Myanmar).

When Burma gained independence in 1948, the Karen and other ethnic groups were told they could have autonomous regions - a promise that was not kept by the Burmese government. The Karen land was taken as a result of a hostile military campaign, forcing the Karen to flee into the jungles and find their way to refugee camps.

(Editor's Note: ETL used Burma throughout the documentary, as that is how the Karen refer to the country.)

"Ger Kler" was the seventh documentary produced by ETL and included a three-week trip to Thailand for filming in December 2013. Additional film footage was shot in the Twin Cities.

The newest documentary by ETL, "Obbasa Ain Gállit: We Continue," on the Sámi people, will premiere at 7 p.m. Thursday, April 23, at Pellegrene Auditorium, SJU, and at 7 p.m. Wednesday, April 29, at Alumnae Hall, CSB.