Bulgaria was the right answer 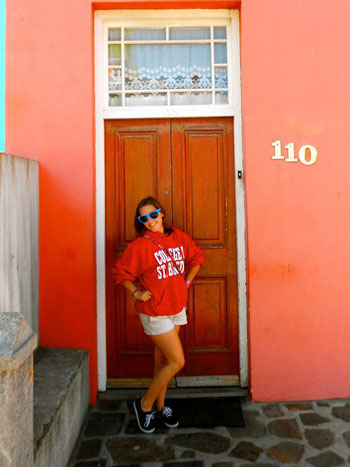 Erin Speltz knew that serving after college was her calling. But deciding where to go was a challenge.

Her process took a little while, but the 2015 College of Saint Benedict graduate will be heading to Bulgaria in the middle of August thanks to a Fulbright English Teaching Assistant (ETA) Award.

"There are so many cool places, and I just wanted to go somewhere where I could do what the whole Fulbright mission is," said Speltz, who graduated with degrees in economics and peace studies.

And so her search began.

Speltz admitted that after studying abroad in South Africa in spring of 2014, she naturally gravitated toward a country in Africa. But she also knew she needed to go out of her comfort zone.

"For some reason, either the Middle East or Eastern Europe started to appeal to me," Speltz said.

She then started looking at sites in these regions, but did have two requirements. First, she knew that wherever she went, there couldn't be a language requirement. She also wanted to go to a place where her skills would help improve an area.

"Some of the programs are really strong research-based, and while I have some research experience I didn't know if I would be a strong candidate for those programs," said Speltz, a native of Altura, Minnesota. "So I looked more into teaching because I knew I would qualify and would offer something to those programs."

That is when Speltz found herself being called to Bulgaria.

"Bulgaria just has this rich culture that I knew nothing about and that's why I wanted it. They have a history that is interesting and developing still which I really thought was cool. Their language is in the Russian family, and Russian is a language I want to learn someday so I thought that would be beneficial," Speltz said.

During her time in Bulgaria, Speltz will be teaching high school students as well as being involved in a side project, like starting a club in the school or volunteering in a nonprofit organization. One option Speltz is considering is starting a knitting club with her students.

"It (knitting) is a really great way to help bring people together. It creates a nice atmosphere for people to come together and converse with one another," Speltz said.

This experience will be both challenging and rewarding for Speltz.   "It's going to be a big challenge to go into this culture that doesn't even have the same alphabet as us and start a project. But I hope that my project is meaningful and sustainable," Speltz said.