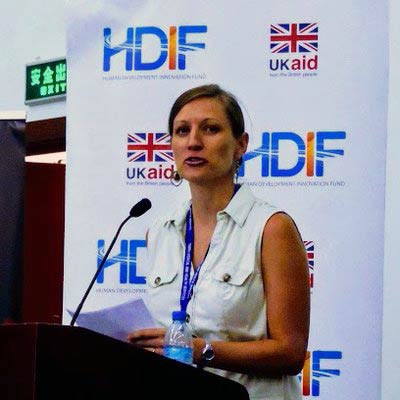 “Being CEO of a very small organization means that I have my hands in pretty much every aspect of what we’re doing,” said Layer, who in March was named CEO of D-tree International.

Whether it’s reviewing the programming in the company’s mobile apps to discussing national rollouts of the products D-tree International delivers, there’s a huge variety to what the 2006 graduate of the College of Saint Benedict does.

Kind of like the liberal arts schooling she received at CSB.

Layer, who has been with D-tree International since 2014, oversees a worldwide company of 25 employees who design and develop digital health systems around the world. The nonprofit organization, with offices in Boston and Washington, D.C., and teams on the ground in Zanzibar, Tanzania and Malawi, estimates it has trained over 8,000 health workers and supported over a million families directly through improved care.

“I do think having come from Saint Ben’s with a liberal arts education has prepared me for this,” Layer said. “If you went to a large school and studied chemistry, let’s say, (your education) is just narrowly focused on science.

“I wouldn’t be able to do the breadth of what I’m doing now, which is thinking about strategy and thinking about the business model as an organization, capacity building, the technical side and program management,” Layer said. “There’s just such a variety of tasks that I need to do, and to do well, and having that very broad experience and training at Saint Ben’s I think really prepared me for the role that I’m doing now, which just requires you to draw on a huge diversity of skill sets.”

“What I appreciate about Saint Ben’s is being able to try so many things, and also keep leveraging them,” she said. “But, even in college, I would have never guessed that I would be where I am right now. It was only because of the broad experience I had that I think let me realize that I can do whatever I want and I can keep discovering, and that’s what I’ve done.”

She went through one more critical moment, thanks to a global ethics class taught by Nick Hayes, the University Chair in Critical thinking at Saint John’s University.

“We were learning about different global issues, one of which was the genocide in Rwanda. There was group of us in the class that were really interested and wanted to learn more, so we worked with Nick Hayes and other students,” Layer said.

Hayes “just challenged us to see and talk about things that you don’t normally think about in Central Minnesota. He exposed us to challenging contexts around the world, and engaged us in interesting discussion,” Layer said. “He just made me think about the world in a different way than I ever had before.”

The group did some fundraising, and ended making a trip to Rwanda and Uganda for about three weeks after the end of the academic year in 2005.

“It caught my interest in global development and international affairs,” Layer said. “I was so inspired by that trip that when I came back, I started my senior year and applied for the Peace Corps. My family had never traveled outside the U.S., and I had never really been exposed to the rest of the world, I would say, until this experience.”

On to the Peace Corps

She then went back to school, earning a master’s degree in public health at Johns Hopkins University. About halfway through that program, she moved to Tanzania, received her degree and worked on other research programs for the Baltimore school in the African country.

Eventually, she joined D-tree International in 2014 – a move that was lucky, she said.

“I was looking to stay and do something in public health. (Working for D-tree International) was slightly outside of what I’d done before, because D-tree is an organization that works kind of in a niche field of digital health, bringing digital technology to improve the quality of health care and health systems,” Layer said. “I hadn’t experienced the digital side of things. But, it seemed like a very interesting field to me.

“Immediately, I realized that it was a perfect intersection of my skill set and what I’m interested in, because being a chemistry major I had kind of an analytical mind and a lot of critical and logical thinking skills. Those are exactly the skills needed to build mobile apps, and to build the protocols that we build in the mobile tools that we’re using for health workers.”

Layer foresees a period of rapid growth for D-tree International.

“We should be growing by about 75 percent this year, because we recently got some major funding to expand the work we’re doing in Zanzibar,” Layer said. “Our predictions are to hopefully triple in size the next three years, because we really see the field taking off globally.

“I think we’re in a really good place, because we are one of the oldest digital health groups in the world, that’s been doing this for the longest time. We’ve been able to demonstrate how we can really improve systems. We’re respected within the field,” she said.

Led by their busy, hands-on CEO.