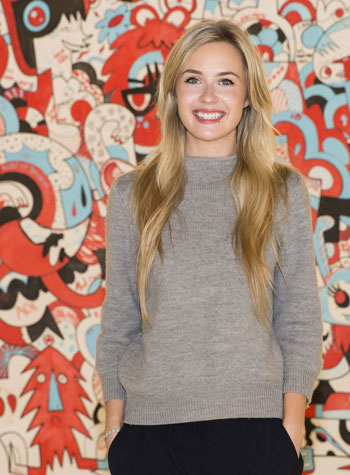 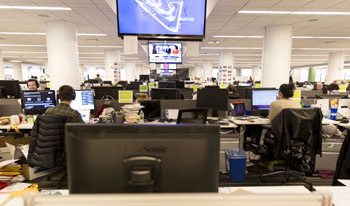 Editor's note: Annie Dittberner is a first-year student at CSB who works as a student assistant in Communication and Marketing at CSB and SJU. She was asked to write a story on Emily Heinz Bina, a 2011 CSB graduate who worked for four years as a student employee for the department. Here is Dittberner's story:

Today, Bina takes on a new role in a much larger chair. The 2011 CSB graduate is situated in the swarm of New York City, working as a producer at HuffPost Live, an internet-based video streaming network run by The Huffington Post.

"Right now, my career is better than I could have envisioned. I work with brilliant people who have unique perspectives in the most interesting city in the world," Bina said. "I don't think, at 25, it gets much better than that."

Bina is a native of New Brighton, Minn. She graduated from CSB with a bachelor's degree in communication.

"I had a great teacher in high school who I credit with giving me my first propensity to pursue journalism, but how that interest would develop I really had no idea," Bina said. "It was perfect then, that when I came to CSB there was room to find and build an education that fulfilled some combination of what I wanted — important subjects, daily relevance, creative problem-solving and decision-making."

Bina worked in the Communication and Marketing Services Department throughout her four years at CSB. In 2008, she was an intern for PBS's "NewsHour with Jim Lehrer" at the Republican National Convention in St. Paul, Minn. Bina also worked as an intern for the Democratic National Convention Committee in Denver. During her sophomore year, she received the Jackson Fellowship award and interned at MPR's "Midday Show," working with host and SJU graduate Gary Eichten. Bina also interned with MPR the following summer as a freelance producer, and spent two summers attending the Aspen Ideas Festival. During her senior year, she worked as an intern for "Almanac" on TPT.

Following graduation, Bina moved to New York City to work as an intern for The Onion, an entertainment newspaper and a website featuring satirical articles reporting on world news. From there, she interned as a writer for The Huffington Post, an online news site, then was hired as an associate producer on to the not-yet-launched project called HuffPost Live. Ten months after the first show launched, Bina was promoted to producer.

"My job as a producer came patiently, first and foremost," Bina said. "I was still an intern for a full year after college, which was hard financially and of course mentally — but I knew it was fleeting and that being young and broke was not a unique experience."

"My move to New York City was probably the biggest risk I took," Bina said. "I think you have to put yourself in the location you want to be successful, then just work hard and hold on."

A normal day for Bina is far from boring. The 25-year-old producer is encouraged by a busy schedule.

"Day to day, I really like my work because I get to see a finished product every 24 hours," she said. "Some people don't get to see that for six months."

Bina usually receives an assignment a few days before the segment will air. From there, she and her associate producer write scripts and questions, pre-interview and book guests, and set up logistics depending on the in-studio or webcam interviewee.

"I pull all the elements (including B-roll footage, direct quotes or tweets) I want to include in the discussion and go into our control room about 15 minutes before we're on air to finalize facts or put out fires," Bina said. "Then I put on my headset, the stage director counts down, and we're on air!"

"My job didn't exist when I graduated college," Bina said. "It's not something I could have wanted before I had it. I still find solace in that when thinking of where my life could still take me. I'm happy knowing it might not exist yet."

In addition to majoring in communication, Bina minored in writing.

"Technically speaking, my major and minor combination was fantastic," Bina recalled. "I write in either very strict Associated Press style, or lofty, alliterative-filled prompter and script writing. Both are a nice change of pace from the other."

Bina said her education has been instrumental to her success.

"During my college years, I learned more than I can say," she said. "I think the biggest lessons were in friendships, passion and pursuit. At CSB and SJU, I learned to love big risks and felt wholly supported by my friends and professors to reach for something just out of my comfort zone. It changed my perspective on what failing looks like, because I fail daily. And things are great."

When Bina envisions her future, she is thrilled to confess that she has no idea what it looks like.

"I'd love to go back to school eventually, and try different mediums in journalism," she said. "I'm hoping to start a project of my own someday and live in more places. Of course travel, write, speak more languages, publish something...there's little I don't want to experience."