Less than 2 years out of CSB, Riitters ’20 has launched career as an analyst with the National Center for Missing and Exploited Children

A little more than three years ago, Ellie Riitters ’20 was approaching her senior year at the College of Saint Benedict and wasn’t sure what she was going to do after graduation.

She’d arrived from Little Falls (Minnesota) High School in the fall of 2016 and started out as a nursing major. During her sophomore year, she elected to follow her interest in social sciences and switched to psychology. She reveled in her classes at Saint Ben’s and Saint John’s University, studied in Ireland during her junior year and thrived with extra curriculars like hiking and yoga. She joined the Mindful Meditation Club, eventually becoming one of its leaders.

She was in a very good place. But unless she wanted to be a yoga therapist, she needed to home in on a career.

Today, her future has become much clearer. She’s a full-time analyst in the Child Victim Identification Program with the National Center for Missing and Exploited Children (NCMEC). She uses the latest cyber tools and interacts with some of the top figures in law enforcement to recover missing children and combat child sexual exploitation.

So how did her path crystalize?

It started at Saint Ben’s

It started at Saint Ben’s when her advisor, a member of the psychology department faculty, introduced her to a forensic psychologist at a sex offender treatment facility in Sartell. Riitters was intrigued and, after a little networking, landed an internship at CORE Professional Services. Even before she finished her degree at CSB and SJU, she landed a part-time job with a Minnesota company delivering drug testing services.

“The intersection of criminal justice and psychology fascinated me and informed my whole perspective on what I wanted to do,” Riitters said.

She moved to Washington DC and started a master’s in forensic psychology from George Washington University. She served an internship in the summer of 2021 as an intelligence community research analyst with Praescient Analytics, a suburban DC provider of IT services and consulting to government and commercial clients. And, by January, she’d finished grad school a semester early, too, with a 4.0 grade-point average.

“Our grad program was at a satellite campus in Alexandria, Virginia, and the site of the headquarters for the National Center for Missing and Exploited Children was literally right next door,” Riitters said. “My professors were lawyers, psychologists and people who worked for the Department of Homeland Security. Many of them worked closely with NCMEC and that helped provide a connection for me.”

Opportunity with NCMEC even before she finished grad school

Even before she finished her graduate degree, she got her foot in the door with NCMEC. Training there can take up to a year, but she expects soon to be focused on case communication with local, state and federal law enforcement.

“I wanted to work in child crimes,” Riitters said. “We work with electronic service providers like Google, Yahoo, TikTok and Snapchat. It’s very complex. It’s also opened my eyes to even more than what you see in the news. It makes me feel like I never want to be on the Internet ever again, even as an adult. It’s a tough job, but it’s rewarding for the wins we get. I feel very lucky to have landed this position. It’s a great starting point.”

To release some of the stress that comes with her position, Riitters maintains a yoga room in her new house with decorative quotes on the walls from her experience with the meditation club at Saint Ben’s. She’s also active with the alumni community for CSB and SJU, which is strong in the DC area.

It’s easy for her to connect with others who share her affinity for Saint Ben’s and Saint John’s. Ironically, she considered many other schools and thought she might want to avoid following her parents, Tom Riitters ’96 and Katie Brand Riitters ’96, who graduated from SJU and CSB.

“Once I saw the campuses, I knew that was where I wanted to go,” said Riitters, whose mom even recently returned to Saint Ben’s to work in institutional advancement. “I think being able to take classes all over the board with a liberal arts education made the difference for me. I had classes in political science, biology, art … they really helped me get a different perspective on a lot of things. I had the support from professors within my major to do that, and I know I wouldn’t be where I am now without Saint Ben’s and Saint John’s. They shaped who I’ve become.” 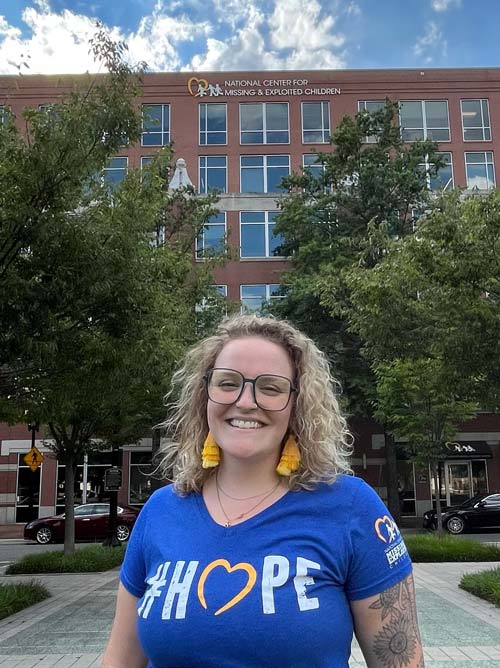 Ellie Riitters ’20 didn’t determine her career path until she was a senior at the College of Saint Benedict. After changing her major, she developed an interest in forensic psychology and has parlayed a graduate degree into a position as an analyst with the National Center for Missing and Exploited Children in suburban Washington DC.