It was a love fostered at young age by her parents, Shane Miller and Betsy Johnson, who are professors in communication and English, respectively, at the College of Saint Benedict and Saint John’s University.

Now Elise, a 2020 graduate of CSB, is continuing that love of the outdoors while attending graduate school in the Integrated Biosciences department at the University of Minnesota-Duluth.

And, thanks to a recent grant from the National Science Foundation (NSF), she will be able to conduct research for the foreseeable future.

Miller will receive three years of funding ($34,000 each year) and her school receives $12,000 each of the three years to pay for her tuition. This award is given to outstanding students in the STEM (Science, Technology, Engineering and Mathematics) fields to support their future research.

She also received the Bill Dahl Graduate Student Research Award from the Botanical Society of America, worth $1,500. Miller will use that grant to hire an undergraduate assistant to help with her work.

“One big draw (for attending UMD for graduate school) was just the outdoor part of Duluth,” Miller said. “I love this city, and it has been great getting to live here. I do like running and hiking. All of that has been an added bonus.

“But one of the big draws for UMD was actually my adviser (Jessica Savage). She’s known for working in this field on the (plant) tissue I’m studying. I really like her method of advising, and I like how she ran the lab. She was actually the main reason I wanted to come up here,” Miller said.

“I am very proud of Elise for achieving this competitive and well-deserved honor,” said Savage, assistant professor of biology at UMD. “Elise is an intelligent and perceptive scientist that is driven to explore important but understudied aspects of plant biology. Conducting research at the cutting edge of a field can be difficult, but Elise has risen to the challenge and shown that she can think creatively about research questions and experimental design.”

Miller notes she has had some great mentors over the years – including Steve Saupe, professor of biology at CSB/SJU; Tim Rademacher from Harvard Forest in Petersham, Massachusetts, whom she conducted a Research Experience for Undergraduates in 2019; and now Savage.

But it all began with her parents.

“They are both really into the outdoors and (they got) my brother and I outside and camping when we were younger. They actually did play a big role in getting me interested in plants and the environment,” Miller said.

Both parents stressed the importance of academics, as well.

“They always made sure that I understood that classes were important, and they really helped me understand what’s the best way to go about graduate school and telling me what it’s like to be in academia and doing research,” Miller added.

Her research centers around plant physiology, specifically in the tissue of plants that transports the sugars produced during photosynthesis. Miller hopes that her research can be used to better understand how plants are responding to climate change.

“Elise’s research will answer critical questions about the physiology of plant growth and connect cellular-level and tissue-level changes in the vascular system to whole plant productivity,” Savage said. “Her focus is on the phloem, the sugar conducting system of the plant. She will use a newly optimized technique to visualize the phloem using fluorescent microscopy and model changes in the vascular network during plant development.”

“It’s kind of interesting because it’s been really hard to study this particular path just because it has a really fast-moving response, and then also it has really, really tiny cells and they all look the same, so you can’t exactly tell what’s going on there,” Miller said. “It’s difficult to explain, but it uses antibodies that cause specific compounds in certain cell walls to fluoresce, so I can create these images that are glowing. The glowing cells are the ones that are actually transporting those sugars.

“I want to see if the anatomy of those cells change at all. I’m looking if different light levels will make those cells bigger or smaller, so they’re able to transport potentially more sugar. So, what could be happening is that as more carbon dioxide is going into the atmosphere, these cells are getting bigger to try and transport the higher amount of carbon they are fixing. It’s something we don’t know yet,” Miller added.

Miller mentioned an issue that many people may be dealing with these days – drought-like conditions.

“If you notice one of the trees in your yard is dying, maybe due to drought conditions or something else, it could be that this tissue just isn’t able to adapt to climate change, but it might be able to in other species,” Miller said.

Miller will wrap up her master’s at UMD in May 2022, and then she intends to complete her Ph.D. During this summer, she is continuing to work in the lab, reading articles and discussing them with other lab partners.

Rather unsurprisingly, because of the outstanding mentors she has had, teaching may be in Miller’s future.

“I’d love to (teach). I’d really love to pass on my knowledge and give back to the communities,” Miller said. 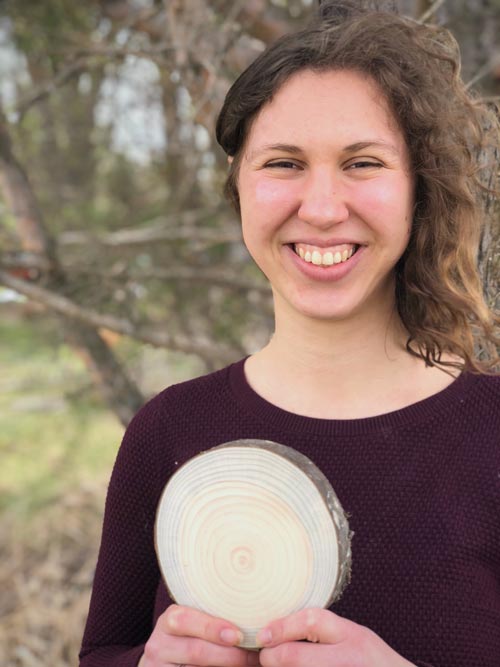