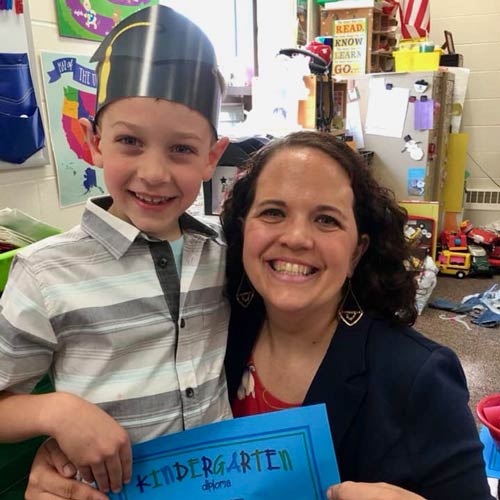 In March, Maressa Brooks Rousslange – a 2002 graduate of the College of Saint Benedict – wasn’t sure she had an answer for that question. Today, she has considerably more experience.

Rousslange has taught kindergarten in the Long Prairie-Grey Eagle school district in Minnesota for 14 years. This year, as COVID-19 began evolving from a concerning story on the news into a global pandemic, “I initially thought school closures would probably be just a ‘big city’ thing,” she recalled. “Maybe not even Minnesota.”

Of course, school closures did become a Minnesota thing. Campuses were closed on March 18 for all Minnesota school districts, and they will remain closed at least through the end of the academic year. As soon as that realization hit, “My thoughts went to my students and their families and all of the questions,” said Rousslange. “How is a 5-year-old going to manage distance learning? How can we make this work without it being a huge burden on families? How are they going to know that I am thinking about them?”

So she began scrambling to support her students – academically, emotionally and socially – any ways she can. “I have tried to send my students mail at least once a week; things like postcards, smelly stickers and Flat Mrs. Rousslanges,” she said. “I delivered little care packages to each of my students’ houses twice; and I have one more planned delivery. I have scheduled themed kindergarten chats on Google Meets a couple of times a week, in the morning, afternoon and evening, so that my students can see and hear me and their classmates. I give feedback on each and every activity my students submit on Seesaw. I have talked to many of my students and their parents on the phone. …”

It has been a quick-developing scramble to make sure she’s meeting the unique needs of each student. Some don’t have access to the technology. Some are being cared for by older siblings (with their own distance learning to do) while parents are at work. Many come from Spanish-speaking families. “It has been a huge learning curve for everyone,” she said.

To help flatten that learning curve for herself and her fellow teachers, Rousslange created the private Facebook group Minnesota Teachers United: Navigating COVID-19 Together.

“I thought to myself, there will need to be a place for us to share resources, plans and ideas,” she said. “While there was a nationwide group already formed (on Facebook), there was not a group specific to Minnesota. I didn’t want to have to scroll through every other state’s information to find something I might need right now.”

The idea quickly took off and member requests began pouring in. “I remember thinking several times that I was in WAY over my head!” she laughed. “I couldn’t approve the requests quickly enough. There would be hundreds of educators waiting for my approval every time I checked Facebook.”

Currently the group has 7,843 members. And, while posts initially seemed to revolve around resources and ideas to make distance learning plans better, lately much of the focus is on graduations, year-end housekeeping tasks and grading issues.

Making the most of the opportunity

When the Saint Ben’s and Saint John’s campuses were closed, Shannon Essler-Petty, assistant professor of education, was initially most concerned about developing and maintaining the relationships she values with her students. “Because we started this semester together in person, it was actually okay to finish the last part of the semester online,” she said. “But moving to online teaching sort of forced me into a project I’ve wanted to get started for a long time.”

And, at least for starters, Essler-Petty’s project is also taking off as a closed Facebook group: Teaching Elementary and Middle School Mathematics Using BEST PRACTICES. “Right now I’ve just put it on the Facebook group for students and alums I stay connected with and teachers I’ve worked with in the field, a number of parents who are struggling with their children’s math right now … and my kids’ elementary school has been tapping into this as well,” she said.

Eventually, she plans to transition this into a website resource for teachers, loaded with video content. “I have a bit of a learning curve with the video part,” she admitted. “So by forcing me to do the online classes with the video tutorials on how to teach math using manipulatives, this semester has moved this project forward. This is the kind of professional development I have wanted to do in order to reach a wider audience and make an impact on the way mathematics is taught in schools and at home.”

Exploring the world while staying at home

As a junior at Saint John’s University and an elementary education major, Brandon Hunt ’21 ordinarily would have done a classroom practicum this spring semester. But there’s not much ordinary about this spring semester. So instead of working in a fourth-grade classroom, Brandon was assigned to work online, one-on-one, with a fourth-grade student in Detroit Lakes, Minnesota.

“I met with my student three times a week, regardless of whether I was teaching or not. We started meeting on Zoom on March 15 and finished up on May 1,” said Hunt. “I really wanted to get to know the student before I created my lesson plan, so I could best cater to what they needed. So these conversations could last anywhere from 10 minutes to 30 minutes, depending on what the student wanted to talk about.”

There’s something inherently strange about teaching geography from a remote location, but that’s the challenge Hunt faced in developing one of his lesson plans. The standard went as follows: “Students will be able to compare adaptations and modifications on the physical environment and how they affect the human population.”

He and his student settled on Google Earth as a tool they could work with together while separate. “Google Earth has created a time travel timeline. We are able to travel back in time to older satellite images of a particular location,” he explained. “It brings in a perspective of what used to be.”

Hunt’s student was able to use that time travel feature to look back at his hometown over time. “Once we labeled what was different, we then dove into the history of the town to try and explain why these changes happened,” said Hunt. “For example, the lakes in and around the town have zebra mussels, because the area is a popular fishing spot where people bring boats in and out.”

The whole experience has taught Hunt about the importance of flexibility and adaptation – for teachers as well as students. He noted, however, that “I don’t think CSB/SJU could have prepared me any better. We learn to always be ready for the unexpected when we walk into a new setting – and this process was no different!”