Theology professor Miguel Díaz sworn in as U.S. Ambassador to the Holy See

Statement from Dr. Miguel H. Díaz (8/5/09): “I am very grateful to the Senate for this confirmation and to President Obama for the confidence he has invested in me. I am honored to be given the responsibility of representing the people of the United States to the Holy See. My family and I hope to relocate to Rome as soon as possible, and I look forward to presenting my credentials to His Holiness at the earliest opportunity. I very much appreciate the support of all those who have reached out to me and to my family with their prayers and best wishes during this process. I know there is a lot of interest among the public and the press as I prepare to take on my new duties as Ambassador to the Holy See. I welcome the opportunity to meet with members of the media once I have arrived in Rome and have presented my credentials.” 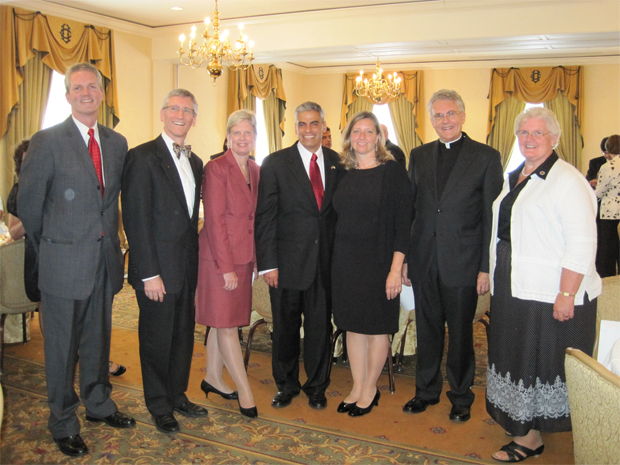 President Barack Obama made the announcement on May 27, 2009  and a confirmation hearing with the Senate Foreign Relations Committee was held on July 22, 2009. Díaz's appointment was approved by the Senate Foreign Relations Committee on July 28, 2009 and confirmed by the full U.S. Senate on Aug. 4, 2009. He was sworn in on Aug. 21, 2009 in Washington, D.C., and presented his credentials to Pope Benedict XVI on Oct. 2, 2009 at the Apostolic Palace of Castel Gandolfo. 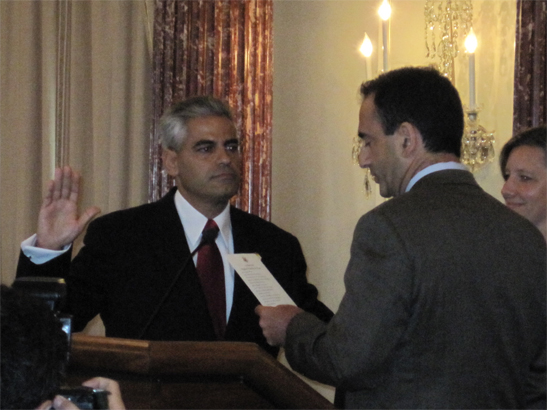 “Professor Miguel Díaz is a skilled Trinitarian theologian who is passionate both as a teacher and a scholar,” said Abbot John Klassen, OSB, of Saint John’s Abbey. “He is a strong proponent of the necessity of the Church to become deeply and broadly multi-cultural, to recognize and appreciate the role that culture plays in a living faith. Born in Havana, Cuba, he is a leading Hispanic theologian in United States.”

“The College of Saint Benedict is enormously proud that Miguel has been named to this important post,” said MaryAnn Baenninger, president of the College of Saint Benedict. “Miguel is a highly-respected theologian and scholar, and an excellent teacher. Most importantly, he has a deep commitment to Catholic social justice and to inclusiveness in the Catholic Church. He truly lives a life of faith. He is ideal for this post.”

Díaz’s theological areas of interests include the Trinity, theological anthropology and Latino/a theologies. He is the author of On Being Human: U.S. Hispanic and Rahnerian Perspectives (Orbis Books, 2002), for which he received the Hispanic Theological Initiative’s 2002 Book of the Year award from Princeton Seminary. In addition, he has had articles published in a number of theological journals and in manuscripts, and is co-editor of the book, From the Heart of Our People: Latino/a Explorations in Systematic Theology (Orbis Books, 1999).

“Miguel is a valuable member of the faculty of the School of Theology∙Seminary,” said William Cahoy, dean of the Saint John’s School of Theology∙Seminary. “His students and colleagues appreciate his passion and commitment to the Church as well as his knowledge of theology. He is a frequent and enthusiastic contributor to programming outside the classroom for students and in continuing education for those working in the Church.”

“I cannot think of anyone who would be more suited to be the Ambassador to the Holy See than Miguel,” said the Rev. Robert Koopmann, OSB, president of Saint John’s University. “He is a distinguished Catholic theologian who loves the Church and his country. For the past five years, Saint John’s has benefited from his considerable skills and abilities, and I know that he will work tirelessly in Rome to positively strengthen the relationship between the Vatican and the U.S.”

Díaz is active in numerous professional associations. He serves on the board of the Catholic Theological Society of America, is past president of the Academy of Catholic Hispanic Theologians of the United States, and is a past member of the steering committee of the Karl Rahner Society. He is a theological consultant to the Catholic Association of Teachers of Homiletics and was appointed to the task force overseeing the review and revisions of the accrediting standards for the Association of Theological Schools.

Díaz frequently offers theological talks to local, regional and national audiences and is a member of Voices for the Common Good, a media speaker’s bureau consisting of prominent Catholic experts on Catholic social teachings. In recent years, he has been invited to participate in various ecumenical conversations. He has engaged in conversation with prominent Catholic Church leaders such as Cardinal Walter Kasper, president of the Pontifical Council for Promoting Christian Unity in Rome, and organized a theological conversation among Black Catholic and Latino/a Catholic theologians around the theme of human identity.

He and Marian, who was the director of Companions on a Journey and CORAD: Heart Speaks to Heart at CSB and SJU, have four children.