Denis McDonough ’92 will soon add a new title to his long legacy of public service.

It was announced Thursday, Dec. 10 that President-elect Joe Biden has nominated the Saint John’s University alumnus and Stillwater, Minnesota native to be Secretary of Veterans Affairs in his administration.

“When I received the call from President-elect Biden, I assured him that I will represent the voices of all veterans at every level, on every issue, every day,” he tweeted. “Those who have served this nation, their caregivers, and survivors should expect nothing less.”

It marks a return to the corridors of government for McDonough, who served as White House chief of staff for former President Barack Obama from 2013-17 – during which time Biden was Vice President.

The announcement from the Biden-Harris transition team made note of the fact that while on the National Security Council, “McDonough made a point of going into the field regularly to meet directly with service members in Afghanistan and Iraq.”

Before his work in the Obama Administration, he served in leadership and policy positions in the U.S. House of Representatives, as Professional Staff Member on the International Relations Committee and in the U.S. Senate for then-Senate Majority Leader Tom Daschle of South Dakota and then-Senator Ken Salazar of Colorado.

He also played safety for legendary football coach John Gagliardi, and helped the Johnnies win MIAC championships in 1989 and 1991. He had 12 career interceptions and recorded 171 tackles (70 solo) and 25 passes defended in 38 career games played.

He completed his graduate work at Georgetown University, and he was a 2012 recipient of an Alumni Achievement Award from SJU.

McDonough began his association with Obama in 2007, when the future president was still a U.S. Senator from Illinois, as his chief foreign policy adviser. When Obama was elected to his first term in 2008, McDonough joined his administration as the National Security Council’s head of Strategic Communication.

He also served as National Security Council Chief of Staff.

On Oct. 20, 2010, Obama announced McDonough would become Deputy National Security Adviser. It was in this position that he was part of one of the most iconic photos of the Obama Administration — when Obama’s security team watched from the White House Situation Room on May 2, 2011, as U.S. Navy SEALs conducted an operation to capture and kill Osama bin Laden.

After his service in the Obama Administration, he returned to the SJU campus for his first public appearance since leaving the White House in March 2017, as commencement speaker in May 2018, and to present the 12th annual Eugene J. McCarthy lecture in October of that year.

He was named to the NCAA’s Board of Governors the following year. 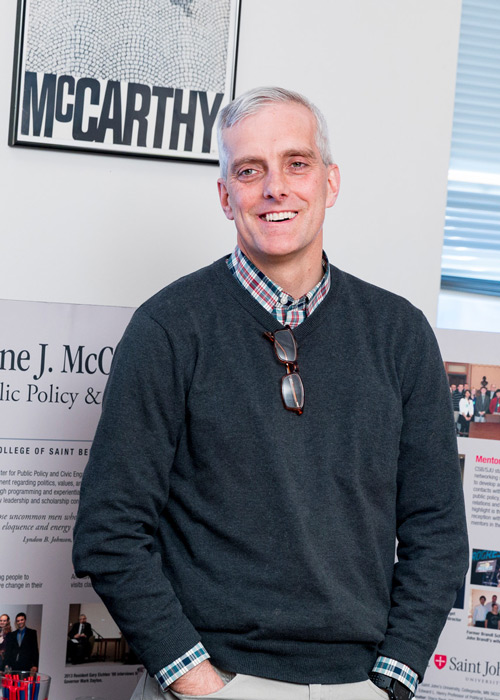