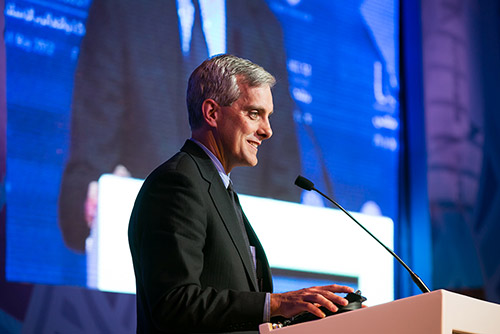 Most people rarely get a good glimpse into the inner workings of the White House.

But on Monday, Oct. 15, Denis McDonough will peel back the layers of intrigue and describe how the West Wing operates.

McDonough, who served four years as President Barack Obama’s Chief of Staff, will present the 12th annual Eugene J. McCarthy lecture at 7:30 p.m. Oct. 15 at the Abbey and University Church.

He will be interviewed by Ken Jones, professor of history at the College of Saint Benedict and SJU. Jones was one of McDonough’s favorite teachers at CSB and SJU.

The event is free, but tickets are needed to attend and are available online. Will call tickets will be available for pickup outside the Abbey Church beginning at 6 p.m., with the doors opening at 6:30 p.m. for general admission seating. For questions, please call the Box Office at 320-363-5777.

Having Jones serve as the event’s moderator is consistent with McDonough’s personality of staying connected to his family, friends and his alma mater, according to SJU President Michael Hemesath.

“Over the years, he has met with hundreds of Johnnies and Bennies when they have been in Washington, D.C. He has made time for tours, conversations and presentations,” Hemesath said before McDonough delivered the Commencement address May 13.

“Knowing the role that Denis has had in recent years, it may surprise you to hear that he is regularly described with words such as humble, loyal, respectful, decent and a good listener. For those of you who are acquainted with Benedictine values, those words most certainly sound familiar,” Hemesath said.

Before his work in the Obama Administration, McDonough served leadership and policy positions in the U.S. House of Representatives, International Relations Committee and U.S. Senate.

In 2017, McDonough joined the Markle Foundation as senior principal, aiming to “transform America’s outdated labor market to reflect the needs of the digital economy,” according to the organization. He is also a senior visiting fellow at the Carnegie’s Technology and International Affairs Program and an executive fellow of the Global Policy Initiative at Notre Dame's Keough School of Global Affairs.

After earning a master’s degree from Georgetown University’s Edmund A. Walsh School of Foreign Service in 1996, he worked as an aide for the House Foreign Relations Committee, where he focused on Latin America. He then served as a senior foreign policy adviser to South Dakota Sen. and Senate Minority Leader Tom Daschle, until Daschle lost his re-election bid in 2004.

McDonough also served as legislative director for former Colorado Sen. Ken Salazar, after his election in 2004. He later became a senior fellow at the Center for American Progress.

In 2007, McDonough began his association with Obama, then a senator in Illinois, as the future president’s chief foreign policy adviser. When Obama was elected to his first term in 2008, McDonough joined his administration as the National Security Council’s head of Strategic Communication. He also served as National Security Council Chief of Staff.

On Oct. 20, 2010, Obama announced that McDonough would become Deputy National Security Adviser. It was in this position that McDonough was part of one of the most iconic photos of the Obama Administration — when Obama’s security team watched from the White House Situation Room on May 2, 2011, as U.S. Navy SEALs conducted an operation to capture and kill Osama bin Laden.

He also played safety for Hall of Fame football coach John Gagliardi, and helped the Johnnies win MIAC championships in 1989 and 1991. He had 12 career interceptions and recorded 171 tackles (70 solo) and 25 passes defended in 38 career games played.

McDonough was a 2012 recipient of an Alumni Achievement Award from SJU.

The annual public lectureship carries McCarthy's deep commitment to the ideals and principles of democratic self-government. It seeks to inspire a new generation of young people to pursue fresh ideas, to challenge the status quo, to effect positive change in their communities and, like McCarthy himself, to lead with honesty, integrity and courage.