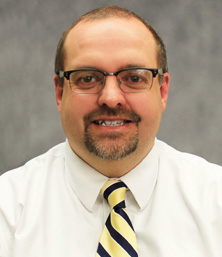 After a nationwide search, the College of Saint Benedict (CSB) and Saint John’s University (SJU) have introduced Nathan Dehne as their new vice president for admission and financial aid. Dehne will begin his new role on Monday, July 9.

“I’ve been passionate about enrollment management for nearly 23 years,” Dehne said. “I consider it a great privilege to serve two of the top liberal arts colleges in the country.”

“Nathan brings a tremendous range of experience to this position, having served at three different institutions and been exposed to many different admissions markets,” said Michael Hemesath, SJU president. “His quantitative orientation and his exceptional people skills are the right combination for Saint Ben’s and Saint John’s at this time in our history.”

“The energy, experience and enthusiasm Nathan brings to CSB/SJU are incredibly compelling,” said Mary Dana Hinton, CSB president. “During the search process, Nathan stood out, demonstrating a keen sense of community and collaboration, along with his broad experience in complex markets and systems. His proven track record of success will help CSB and SJU reach greater heights.”

Dehne currently serves as the vice president for admissions and enrollment services at Cardinal Stritch University in Milwaukee, where he also provided executive leadership for strategic planning and athletics within his tenure.

Prior to joining Cardinal Stritch in 2014, Dehne worked at Lakeland College in Sheboygan, Wisconsin, for 11 years. He began his career there as the director of admission, where his team achieved four record years in enrollment over a five-year period — resulting in a 29 percent increase in student enrollment. While at Lakeland, he also served as vice president for student development for five years, overseeing the departments of traditional admission, athletics, student affairs, residence life, student activities, safety and security, health and counseling services and career development. His capstone role at Lakeland College was vice president for athletics and wellness, in which he led all operations for the athletic department, including the oversight of enrollment activities and programs for 135 new student athletes, comprising 54 percent of the 2014 incoming class.

Dehne began his career in higher education working as the associate director of admission at his alma mater, Carroll University in Waukesha, Wisconsin. He holds a Bachelor of Science degree in communication and English from Carroll and a Master of Science degree in higher education counseling from Lakeland College. “I often say that I have chosen the best profession in the world because we can see the effect we have on the trajectory of a person’s life,” Dehne said. That career, and the mentors he’s had along the way have convinced him that “sound enrollment management strategy, collaboration across university departments, transparency and a constant desire to be happy with your successes, but never content, is not only expected, but also required.”

Dehne succeeds Calvin Ryan Mosley, who announced his retirement earlier this year, after serving 10 years as vice president for CSB/SJU.

Dehne and his wife, Melissa, and their children Benjamin, Emma and Sam, will make their home in Minnesota. “My family and I look forward to knowing the depth and breadth of experiences that await us within and around the CSB and SJU communities,” Dehne said.