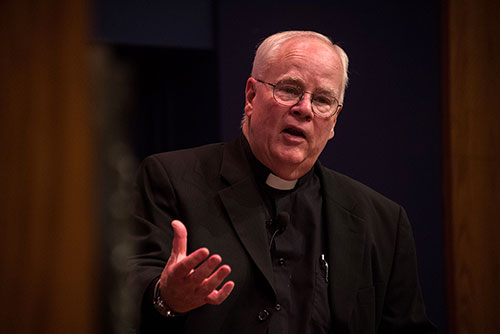 The confrontation between rising nationalism and massive refugee movements raises urgent ethical and political questions: What rights do displaced persons have? What ethical obligations do Christians have to contribute to the global common good?

The Rev. David Hollenbach, S.J., will address these issues during the annual College of Saint Benedict Koch Chair in Catholic Thought and Culture lecture at 7:30 p.m. Monday, Nov. 4 at room 204, Gorecki Center at CSB.

The title of his lecture is “The Global Common Good in a World of Rising Nationalism” and is free and open to the public.

Hollenbach will argue that, although national borders have moral weight, the rights of displaced persons create responsibilities that can lead to more stringent obligations. These include the duty to prevent conflicts that drive millions from their homes and to take positive action to assist displaced people in great need through asylum and resettlement. Commitment to the global common good also calls developed nations in the north to assist developing countries who host the vast majority of the world’s displaced people.

Hollenbach largely centers his work in Africa, devoting his time and studies to human rights and humanitarian issues. He teaches at colleges and institutes in Kenya, Vietnam and the Philippines.

He also collaborates with the Jesuit Refugee Service to protect the human rights of the displaced migrant. His teaching style is influenced by Catholic thought, moral philosophy and social science approaches.

The CSB Koch Chair in Catholic Thought and Culture was established in 2002 with a gift from former CSB Board of Trustees member Barbara “Babs” Gray Koch and her husband, David Koch of Wayzata, Minnesota. The Koch Chair provides opportunities for faculty, staff and students at CSB/SJU, as well as the general public, to gain an enriched understanding of the heritage of Catholic thought that has shaped not only the faith tradition of CSB/SJU but also the pursuit of knowledge across disciplines.