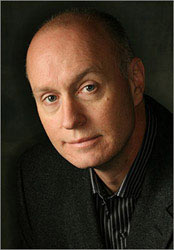 Dan Barry, an author and New York Times columnist, will present a reading and conversation from his most recent book "Bottom of the 33rd: Hope, Redemption and Baseball's Longest Game" at 4:15 p.m. Thursday, Oct. 11, at the Saint John's Pottery Studio. The presentation is free and open to the public.

Barry's presentation is co-sponsored by the University Chair in Critical Thinking, the Saint John's Pottery Studio and the Literary Arts Institute of the College of Saint Benedict.

"Bottom of the 33rd" is about the longest game ever played in baseball history, when the Pawtucket Red Sox and the Rochester Red Wings started a 33-inning minor-league game on April 18, 1981. After eight hours and 32 innings, the game was suspended and resumed two months later. Two future Hall of Famers played in the game - Wade Boggs and Cal Ripken, Jr.

Barry was recently named the 2012 recipient of the PEN/ESPN Award for Sports Literary Writing for "Bottom of the 33rd."

Barry writes the "This Land" column for The New York Times, a feature that he inaugurated in January 2007. Barry joined the Times in September 1995. Since then he has held several positions at the Times, including Long Island bureau chief, city hall bureau chief, and, from June 2003 until November 2006, the "About New York" columnist. He was a major contributor to the newspaper's coverage of the Sept. 11 catastrophe and its aftermath, as well as its coverage of New Orleans and the Gulf Coast in the wake of Hurricane Katrina.

Barry has won several journalism honors. In 1992, he and two other Providence Journal reporters won a George Polk Award for an investigation into the causes of a state banking crisis. In 1994, he and the other members of the Journal's investigative team won a Pulitzer Prize for a series of articles about Rhode Island's court system. His other honors include the 2003 American Society of Newspaper Editors Award for deadline reporting, for his coverage of the first anniversary of Sept. 11, and the 2005 Mike Berger Award, from the Columbia University Graduate School of Journalism, which honors in-depth human interest reporting. He was also a finalist for the Pulitzer Prize for feature writing in 2006, for his slice-of-life reports from hurricane-battered New Orleans and from New York, and in 2010, for his "This Land" articles.