Ronald Reagan and Ted Kennedy came from different sides of the political spectrum.

Both may have been poster boys for their respective political parties and beliefs, but at the end of the day, both generally wanted what was right for the country.

It’s that kind of attitude that has inspired Kevin Curwick. 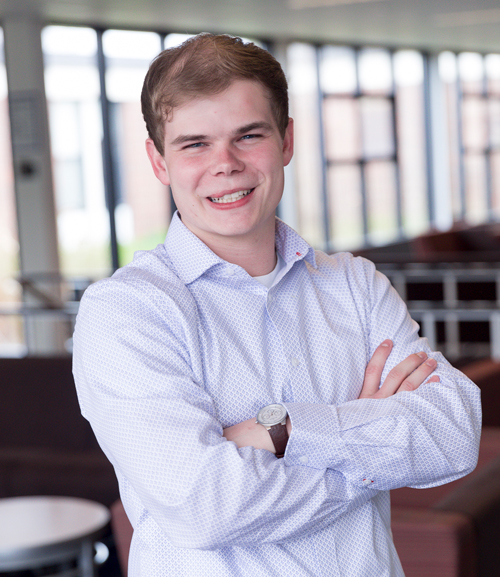 Curwick is a senior at Saint John’s University. He’s an individualized natural science-integrative health science major who graduates in May, with a long-range goal of becoming a physician. First, though, he’ll be attending the Ronald Reagan Presidential Foundation and Institute’s Leadership and the American Presidency (LTAP) summer 2017 program in Washington, D.C.

Over the last year or so, he has had an interesting metamorphosis.

“I certainly have political views, but in the past I wasn’t one to necessarily act on them. My civic engagement has been much more focused on service as opposed to public policy,” Curwick recalled.

“That whole conference really sparked a desire to be engaged in a different manner, at a different level,” Curwick said.

One of the things that still gives Curwick goosebumps was visiting the Edward M. Kennedy Institute for the United States Senate in Boston. The institute features full-scale mock-ups of Kennedy’s Capitol Hill office and the Senate chambers, and included a simulation of the process to pass a bill.

Since he was a Newman Fellow, he was also able to apply for the 2017 LTAP summer program. He was one of five students accepted into the program, and the only one to receive a full scholarship worth $7,500.

What does Curwick know about Reagan, whose foundation supports LTAP?

“One thing that I have to give him credit for, if you look at the last 30 years or so, I think the nation was at a good point, and was relatively united,” Curwick said. “Just seeing some of the others that were awarded a grant, I think there will be such an emphasis on diversity of opinion.

“It’s not a partisan program, in which you’re exclusively looking for conservative-minded people. I think the broad range of perspectives will be one of the greatest benefits of the program.”

The LTAP, which runs from early June through the end of July, is designed to develop the next generation of civilian leaders. It consists of three elements:

“It’s an interesting mix of responsibilities,” Curwick said. “Some days will be internship heavy, others I’ll be course heavy and still others I’ll be events heavy. They keep us on our toes and plan to get us involved in public policy and civically engaged in a variety of ways, which is really exciting.”

Curwick is most excited about his internship.

“As a hopeful future physician, I’m very interested in palliation and palliative care. Right now it is an emerging field in the United States and access to services can be quite limited. Learning about policy and becoming engaged in health advocacy just made sense for me,” Curwick said. “One of the primary grants I’ll be working with is improving access for veterans to palliative care services.

“My major point of emphasis is health disparity in medicine and in health care. It’s the opportunity to work with an organization that I want to be working with in the future, as well as working on health policy right now,” Curwick said.

“In my past, I have been heavily involved with in the biomedical research component, which I find fascinating,” Curwick said. “But personally, I can’t help but acknowledge the human component of health care and medicine. Creating biomedical therapies and treatments is one component of medicine and is certainly essential, but creating access to those who need the treatment may be even more essential.”

Curwick said he is quite thankful for his liberal arts education at SJU and the College of Saint Benedict.

“One of the things I will say is that contributing most to my understanding of health care and medicine and people is an approach of not just trying to drill my (head) as a pre-med student,” Curwick said. “I’m an integrative health science major, which instead of just focusing on biology or chemistry, I actually am also able to take courses in exercise sports science, nutrition and psychology.