Faculty and staff members from the College of Saint Benedict, St. Joseph, and Saint John’s University, Collegeville, were honored at the Academic Affairs Awards Ceremony Monday, May 8 at Alumnae Hall, Haehn Campus Center.

In addition to recognition for years of service, promotions, contributions as department chairs and leaders, the following awards were presented.

S. Mary Grell Teacher of Distinction Award – Erin Szabo, associate professor of communication. S. Mary, a noted biologist, served students at CSB/SJU for more than 35 years with intelligence, dedication and genuine affection for them. The difference S. Mary made in her lifetime of teaching at Saint Benedict is celebrated through the recognition each year of a faculty member who represents the best teaching and learning at CSB/SJU.

Szabo came to CSB/SJU in 2001. She has authored dozens of articles, papers and presentations, and has an active research record with interests in reducing adolescent and health risk behaviors, and effects of media on children’s fright responses, mediated health messages and body image. In 2004, she was nominated for the American Association of University Women’s “Emerging Scholar” award. She has also served her colleges and community. Szabo served as chair of the Academic Assessment Committee the past two years, and has mentored several students in their presentation of research to both regional and local forums. The students in her “Strategic Communication Campaigns” class developed the “Stop at Buzzed” campaign to reduce student binge drinking, which won a first prize in the student division of the AdFed organization.

Robert L. Spaeth Teacher of Distinction Award – Rodger Narloch, associate professor of psychology. This award is named in honor of Spaeth, who died in 1994. He served as dean at SJU for nine years, in addition to offering lengthy terms of service as professor of liberal studies and director of freshman symposium.  Each year, Spaeth’s commitment to excellent teaching is remembered by honoring a faculty who brings a special passion and mastery to the classroom and the learning community.

Narloch, who received his baccalaureate degree in 1991 from SJU, returned to teach at CSB/SJU in 2000. He has been an active scholar, with numerous publications, professional papers and presentations to his credits. Several of his students have advanced their own research to such a level that many have presented papers (co-authored with Narloch) at national conferences. In the past two years, he has co-authored with his students six peer-reviewed conference presentations and one article. Narloch has supervised more than 40 students in their undergraduate research, and has been a reader or advisor for nearly 20 student honors theses. He was the faculty advisor for 35 students during the 2005-06 school year. Narloch has served as co-advisor for the Psychology Club since 1991, and in 2004 received the colleges’ Advising Award for Social Science.

Linda Mealey Teacher-Scholar Award – Carie Braun, assistant professor of nursing. The Linda Mealey Teacher-Scholar Award is given annually to a faculty member who exemplifies demonstrated excellence in scholarship as well as teaching, conducts student/faculty collaborative research or creative work and excels in the mentoring of students. In recognition of the late Linda Mealey’s contributions to the CSB/SJU community, this award is now named in honor of Mealey, who received the award four years ago.

Braun has taught in the nursing department since 1998. She has involved nearly 50 students in nine major research and creative projects – in fact, students have been included in every research and creative project she has undertaken at CSB/SJU. These projects include traditional research study with student research assistants in areas such as animal-assisted therapy as a pain intervention for children, to mentoring a student who authored a chapter on diabetes mellitus in a pathophysiology textbook Braun is writing. She also utilized 17 students to “guest-edit” completed chapters in the textbook.

Additional awards were distributed as follows: 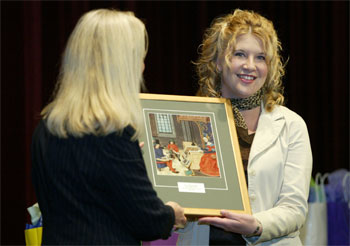 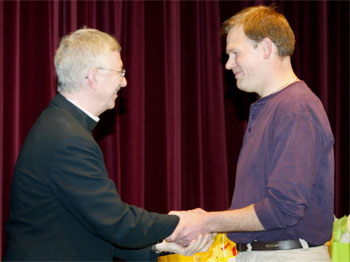