A front row seat to history.

That’s how CSB and SJU students studying in London this semester describe getting the chance to be present at events surrounding the passing and funeral of Queen Elizabeth II and the ascension to the throne of King Charles III.

The Queen – whose reign lasted over 70 years, the longest of any British monarch – died on Sept. 8, triggering 10 days of mourning leading up to her funeral on Monday, Sept. 19 at London’s Westminster Abbey.

“It has been incredibly interesting being able to be in London during such a historic time,” said College of Saint Benedict junior Lauren Pfeffer, an accounting major taking part in CSB and SJU’s United Kingdom-London program, via email. “We had only been in London for a little over a week when the Queen passed, so we were still adjusting to life (here) when all of the events started happening.

“It has been incredibly cool to see how big of an impact the Queen had on not just the country, but the entire world and to see all of the things they are doing to honor and celebrate her.”

Pfeffer and fellow CSB juniors Anna Stuckmayer, Maia Reuter and Isabella Bovee were able to take part in a number of events - including standing outside Buckingham Palace on the night of the Queen’s death, being in attendance for a salute to the new King on Sept. 10 and standing outside the funeral itself and watching the procession.

“On the night of her passing, we went to Buckingham Palace to see how everyone was reacting to the news,” Stuckmayer said via email. “I will never forget being there at night. Only a short time after the news broke, numerous people had gathered outside of the palace. Despite the large number of people, it was eerily quiet.

“We were also able to see a 21-gun salute for King Charles while visiting Stonehenge. This was interesting to see, and we didn’t know it would be happening until we were there. Lastly, we were able to watch the funeral procession in person. We even spotted a few members of the royal family!"

The four were even interviewed by Twin Cities television station KMSP (FOX 9), sharing their experiences with the audience back home.

“Honestly, it is a super-overwhelming time because we’ve only been here for a couple of weeks,” said Reuter, a communication major, via email. “We’re still trying to adjust to being in London, and then we are living through history.”

Bovee said being present for the funeral was especially striking.

“I was shocked by how grand and immense of an event it was,” said the global business leadership major via email. “With hundreds of thousands of people lined up to watch and an hour-long funeral, two minutes of silence across the city and an hour-long processional featuring so many royal guards, military personnel, the royal family, the casket, bands playing processional music and so many other people who were of importance to the royals.

“It was really one of the most impressive things I've ever witnessed.”

All four students said they have definitely noticed a sense of loss as they have been out and about in London over the past two weeks.

“There are memorials and tributes to the Queen all over the city,” Bovee said. “Her picture can be seen just about everywhere. I happened to walk through Green Park last Thursday. The city has turned the park into a floral tribute to the Queen, and the sheer number of gifts and flowers and letters that had been left in honor of her was mind-blowing. There were hundreds of piles of bouquets and drawings and cards and all sorts of other things to honor her and it was incredibly moving to see.”

“It’s difficult to say how much the mood of London changed since the Queen’s passing considering we were only here for a week before it happened,” added Stuckmayer, an elementary education major. “We didn’t have much time to experience and get to know London. However, the mood was noticeably different on the day of her passing. Being at Buckingham Palace was surreal considering how many people came together to quietly pay their respects to the Queen.

“You can tell that, while most people didn’t know the Queen personally, her passing impacted everyone.”

Each student said it’s been a moment in time they won’t soon forget.

“I am extremely grateful for the opportunity to study abroad during such a historical moment,” Stuckmayer said. “Even though we’ve only been here for three weeks, this has (already) been such a valuable learning experience.”

“It’s wild to think that this is something that will likely be written about in history books and will be taught in history classes for years to come,” Bovee added. “My own kids and grandkids will learn about this. It's honestly hard to process how monumental of a moment this is on top of all the other incredible things I get to experience just by studying abroad.” 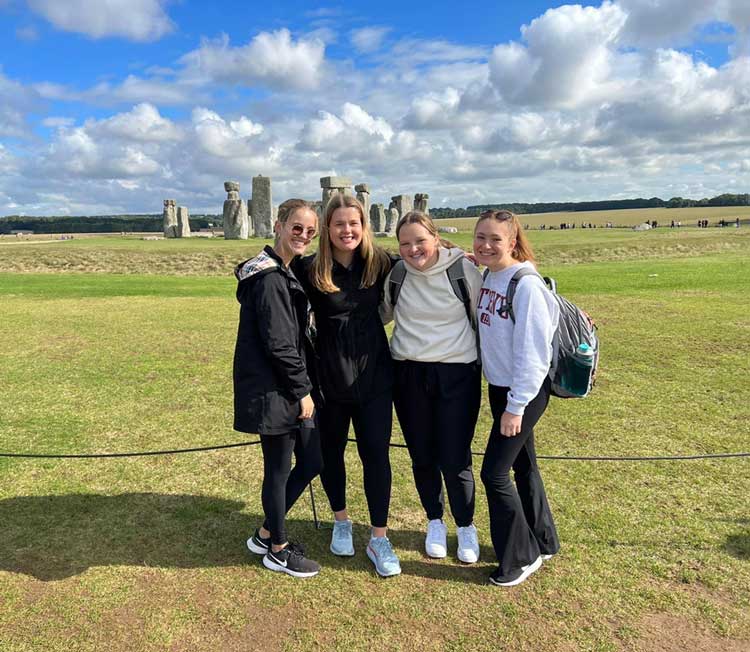