College of Saint Benedict President MaryAnn Baenninger has joined over 250 other college and university presidents in formally committing to sharply reduce and eventually eliminate all of the college’s global warming emissions. Baenninger also pledged to accelerate the research and educational efforts to equip society to re-stabilize the Earth’s climate.

The American College and University Presidents Climate Commitment was adopted today at a summit of higher education leaders in Washington, D.C.

“Being conscientious stewards of the environment has always been an important part of our mission as a college,” said Baenninger, who was one of 103 president signatories in the Leadership Circle, who have agreed to help lead the initiative, promote it and recruit colleagues to join. “The challenge of global warming makes that work more vital than ever, and the College of Saint Benedict is committed to leading efforts to attain climate neutrality and live responsibly.”

The school is in the process of formalizing its plan for the future, including adopting green standards for buildings; requiring ENERGY STAR certification for products purchased by the college; offsetting emissions due to air travel; encouraging public transportation; purchasing energy from renewable sources; and supporting climate and sustainability shareholder proposals through its endowment.

Considered stewardship of natural resources and long-term planning are central to the Benedictine tradition of the school. CSB will make decisions in the future that will reflect the best attempts to reduce the environmental impacts of building construction and operation, while minimizing the loss of green space and other encroachments on the local environment.

These efforts build on the school’s ongoing commitment to sustainability, including:

The Presidents Climate Commitment is the first such effort by any major sector of society to set climate neutrality – not just a reduction – as its target. This undertaking by America’s colleges and universities is inspired by efforts like the U.S. Mayors Climate Protection Agreement, the U.S. Climate Action Partnership and other collective efforts by states and businesses.

“Colleges and universities must lead the effort to reverse global warming for the health and well-being of current and future generations,” said Michael Crow, president of Arizona State University and chair of the ACUPCC Steering Committee. “On behalf of all the signatories, I welcome President Baenninger to the commitment. We are honored to have her join us.”

The American College and University Presidents Climate Committee is a high-visibility effort to address global warming by garnering institutional commitments to neutralize greenhouse gas emissions, and to accelerate the research and educational efforts of higher education to equip society to re-stabilize the Earth’s climate. Under the guidance and direction of university presidents, the commitment is being supported and implemented by the Association for the Advancement of Sustainability in Higher Education (AASHE), Second Nature and ecoAmerica.

You can learn more at www.presidentsclimatecommitment.org. 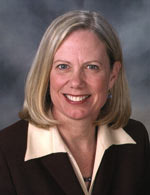