The College of Saint Benedict formally broke ground on Tuesday, August 29, on a 51,000-square-foot state-of-the-art dining and conference center to be named for the donors, Ben and Dorothy Gorecki of Milaca. 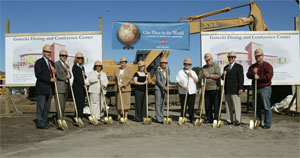 The couple’s $3.5 million gift for the project is the largest single gift in the college’s history. It is their second multi-million dollar gift to CSB. In 2002, they contributed a leadership gift to expand and renovate the college’s Benedicta Arts Center.

“The Goreckis came to know the college when their granddaughter was a student,” said MaryAnn Baenninger, CSB president. “They are remarkable people who are committed to sharing their good fortune to help others.”

Funding for the new dining and conference center is one of two building projects included in CSB’s $80 million capital campaign, Our Place in the World.  The other was support for the enhancements to the BAC. To date, the college has raised $55 million toward its campaign goal. 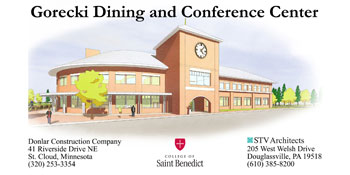 The new two-story, $12 million building will replace the nearly 100-year-old CSB cafeteria and kitchen now located in the basement of the Main Building. The new project was necessitated by a 2004 agreement with the Sisters of the Order of Saint Benedict that the area be returned to the Sisters in 2007. The intimacy of the current dining hall will be maintained in the new center’s 7,600 square-foot main dining area. The building is expected to open in June 2007.

“Our students need and deserve a new dining center,” Baenninger said. “Although the current dining center has been modernized and refurbished several times, it is basically the same resource that students used in 1913 at the founding of the college.”

The first floor of the facility will feature a 3,600-square-foot lobby where coffee, sandwiches and soup will be available nearly 24-hours a day. The lobby will feature wireless internet connections and a large fireplace. It also will serve as a depot for the buses that run between CSB and Saint John’s University.

Upstairs, the building will feature a 7,400-square-foot banquet hall that can be divided into three smaller rooms for conferences and other events. Also equipped for high-speed internet and other smart technology, it will be among the largest public meeting facilities in the St. Cloud area. In the summer of 2008, 700 educators who are members of the Council on Undergraduate Research will use the facility for their national conference.

The Gorecki Dining and Conference Center is located in the heart of the CSB campus, adjacent to the Clemens Library and between the West Apartments and the BAC.

“The location of the building is as practical as it is symbolic,” Baenninger said. “The center will become the hub of activity for many students, faculty and visitors. It also is a highly public and physical manifestation of the Benedictine values of hospitality and community. The sharing of a meal is one of the most powerful civilizing forces in society.” 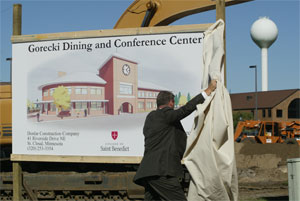 The center was designed by STV Architects, based in Douglassville, Pa. The firm has particular expertise in designing food service and dining facilities, and their work includes facilities at Susquehanna University, Bloomsburg University, Bucknell University, Indiana University of Pennsylvania and Kutztown University. It will be faced in red brick and feature a peaked roof and other elements consistent with the style of other buildings on campus. Donlar Construction of St. Cloud and St. Paul, was selected to complete the project.