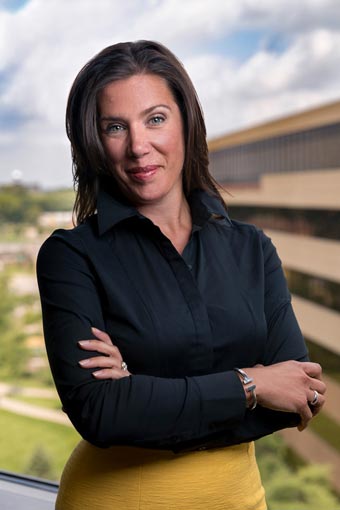 Barry will be the fifth CEO of Best Buy in the 53-year history of the company when she replaces Hubert Joly. She is currently the company's chief financial and strategic transformation officer.

Barry began her career at Deloitte and Touche, working in the audit function, where she earned her CPA and was exposed to a variety of industries. In 1999, she moved to Best Buy, supporting the service repair business as a financial analyst.

Since then, she has held roles of rapidly increasing responsibility in both operational and financial leadership areas at Best Buy.

“I could not have been more honored and humbled” at being elevated to CEO, Barry said in an interview with the Star-Tribune newspaper in Minneapolis.

Barry was the 2017 commencement speaker at CSB. In her speech, she spoke on women's leadership and encouraged graduates to think critically, lead courageously and advocate passionately.

"All you can do is embrace your experiences and passions, make decisions and learn from your mistakes," she said in that speech. "Today, I have hit on all parts of my life - my work, my family, my friends. They all make me who I am, and I bring them all with me every day I go to work or conquer the next hill."

Read more about Barry's Best Buy journey in a  2016 story that appeared on the CSB/Saint John's University website.