SJU graduate helping NASA prepare for a trip to Mars

A Saint John’s University graduate is helping NASA prepare for an eventual trip to Mars.

Christopher Roberts ’05 is one of four volunteer research subjects who are living and working for 45 days inside a unique, ground-based habitat at NASA’s Johnson Space Center in Houston.

Designed to serve as an analog for isolation, confinement and remote conditions in exploration scenarios, this small habitat is called the Human Exploration Research Analog, or HERA, according to a NASA press release.

Roberts and his crewmates – Lauren Cornell, Monique Garcia and Madelyne Willis – entered HERA on Oct. 1 to simulate the long trek to Mars’ moon Phobos. Similar to other HERA missions, once the habitat’s doors close, the crew will need to stay inside for 45 days until the mission ends on Nov. 15, according to NASA.

As the simulated journey takes crew members closer to Phobos, those inside will experience increasing delays in communicating with the outside world. When the simulation successfully brings the crew to Phobos, this delay will last up to five minutes each way. Such delays will force the crew — and those coordinating their journey — to practice communicating in ways that minimize impacts to mission operations and allow the crew sufficient autonomy to accomplish the mission, NASA reported.

Roberts graduated from SJU with a degree in applied physics. He then attended Embry-Riddle Aeronautical University, where he obtained a master’s degree in engineering physics and focused his research on laser-induced breakdown spectroscopy.

“Chris Roberts transferred to SJU and completed our applied physics major at an accelerated pace, finishing in three years,” said Dean Langley, professor of physics at the College of Saint Benedict and SJU. “He worked with me on various experiments in optics, including his senior thesis - he built a laser gyroscope that could sense rotation by the difference in travel times for light beams going opposite directions around a spool of optical fiber.

“Along with his talent as a scientist, I remember him having a quiet, pleasant, confident personality that made him enjoyable to work with, and which will make him a great teammate on NASA's HERA program.  I was excited to hear the news that he had been selected for this important role and wish him the best of success,” Langley said.

Roberts works as a project engineer with NASA’s Cold Stowage team in support of the International Space Station (ISS) program. In this role, Roberts is responsible for end-to-end integration and on-orbit operations for a fleet of hardware on both the space station and visiting vehicle missions.

SJU graduate Mark Vande Hei ’89 is in the middle of what is expected to be a 353-day mission aboard the ISS. That will break the existing record for longest single spaceflight by an American astronaut of 340 days, currently held by Scott Kelly.

Roberts and his team are 2021 recipients of NASA’s Spaceflight Awareness Award, an accolade given to employees for their dedication and contributions to flight safety and mission success. Previously, he was a cargo operations flight controller for the space shuttle and for assembly missions to the space station.

The upcoming mission signals the start of HERA’s Campaign 6. Three additional missions will follow as part of the campaign, with the final egress set for Sept. 12, 2022.

NASA’s Human Research Program will perform 15 total studies throughout the missions, with seven returning and eight new investigations. The data collected as part of these missions will continue to help prepare humans for Artemis exploration missions to the Moon, trips to the planned lunar Gateway, and long-duration missions to Mars.

The average trip to Mars will take about seven months and about 300 million miles (one way), although that figure varies greatly. 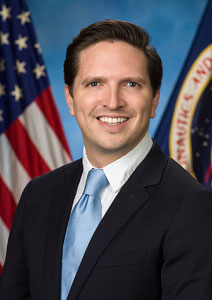 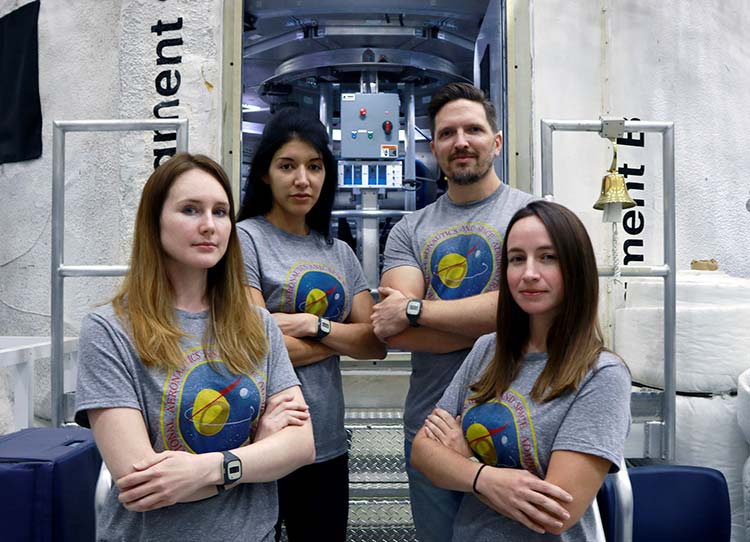 The crew for NASA’s Human Exploration Research Analog, or HERA, stands in front of the habitat that will be their home for 45 days. From left to right: Lauren Cornell, Monique Garcia, SJU graduate Christopher Roberts and Madelyne Willis. All photos courtesy of NASA.