A Career in Clay

SJU alumnus building business, one pot at a time 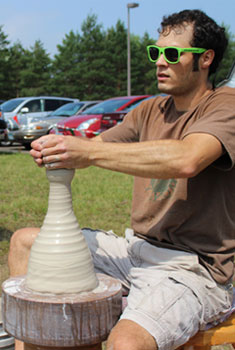 Muffins perched atop his obsidian plates scrape across the counter at the Local Blend coffee shop. Shelves of cobalt-dripped mugs welcome visitors to his business office, tucked beyond the rows of washers and dryers at the St. Joseph Cleaners and Laundromat. And, most Fridays, Joel Cherrico '10 can be found at the St. Joseph Farmers' Market — throwing and selling his pots.

With his pottery so visible in the St. Joseph community, it's hard to imagine Cherrico enrolled at Saint John's University planning to pursue anything other than ceramics.

After a semester of coursework on a pre-med track, the Cedar Rapids, Iowa, native realized he was better suited for a potter's wheel than a stethoscope.

"Pre-med was hard. I passed both classes but I didn't like it," he said, "but I was acing my art classes."

Cherrico connected with a broad set of on and off-campus opportunities through his art classes. By spring semester of his first year at Saint John's, he was a student employee in the ceramics studio in the Benedicta Arts Center, interning with local potter JD Jorgenson, and enrolled in ceramics courses.

"I explored every option that was ambitious and seemed worthwhile," Cherrico said, "I didn't sleep much but I wasn't tired. I was having a great time."

Faculty adviser Sam Johnson, assistant art professor at CSB and SJU, said Cherrico set his mind on a career as a potter early on in his time at CSB and SJU.

"Joel from the very onset said 'I want to make my living this way,' " Johnson said. "I felt like to be responsible to him we had to talk not only about the quality of the things that he was making, the objects that he was making, but I wanted his sense of professionalism and business to become equally as sophisticated."

"It's kind of silly to think that the art department has to do all of it when we have a university that has people skilled in these various things," Johnson said.

"I had eight credits of management classes. I wasn't a major. It wasn't a minor. It wasn't any kind of required thing," he said. "It was, I want to figure out the financials. I wanted to make money and consistently support that."

It was in a management class that Cherrico developed the business plan that launched his operation.

The plan worked like this: he would create all the serving ware used at the Local Blend coffee shop, effectively renting it to the shop. If customers wanted to buy the mug used to serve their latte, they could. The Local Blend would get 25 percent of the profits from all sales, cover the cost of any breakage and display additional pottery around the shop.

With approval from the coffee shop and a low-interest loan secured from a local bank with connections to the Donald McNeely Center for Entrepreneurship of the College of Saint Benedict and Saint John's University, Cherrico put his plan in to action.

According to Johnson, Cherrico is encouraging more Bennies and Johnnies to dabble in coursework outside their chosen disciplines.

"I have beginning ceramics students all the time that mention that they became interested in trying ceramics because they saw Joel," he said. "They've had some kind of contact and it's made a big impression on them. So they're going to try it.

"They may be nurses, they may be English students, they may be business students not necessarily thinking they're particularly artistic. Yet they're willing to open up that side of themselves because he's got coffee cups at the coffee shop."

More to this story

Watch Cherrico discuss the challenges of balancing art and entrepreneurship