In a time where understanding public health and vaccines is more important than ever, two students at the College of Saint Benedict and Saint John’s University are helping to conduct research that is studying just that.

Hannah Bock and Jack Colleran, both senior biology majors at CSB and SJU, respectively, are currently working with Dr. Ashley Fink, visiting assistant professor of biology, to investigate immune responses to the influenza vaccine in humans and mice.

“How exercise and stress impact immunity has always been an interest of mine,” said Fink, who developed the idea for this study. “Much of this research stems from the work I conducted at Johns Hopkins on characterizing how biological sex impacts the immune response to influenza vaccination and infection.”

Their current research began in the summer of 2019 when both students were selected to work in the CSB/SJU Biology Department’s summer research fellowship program. The original study examined the immune responses to the influenza vaccine in mouse models based on exercise, diet and sex.

This year, the duo and their professor have graduated to a human study of the same topic.

“We began this study using an animal model because some of the manipulations (isolating cells, tissues and blood) that are required to really perform mechanistic studies are quite invasive and difficult to achieve exclusively in humans,” Fink said.

“However, we have an ideal population on our college campuses to study these potential effects in humans and thus one of the reasons I decided to translate what we were doing in animals to evaluate how exercise may or may not influence how well humans immunologically respond to the seasonal influenza vaccine.” she said.

Colleran explained how the samples were done.

“We collected blood samples before and after influenza vaccination from both males and females that either rarely exercise or consistently exercise at a high intensity,” Colleran said. “We aimed to gain a better understanding of how both biological sex and exercise influence vaccine responses.”

The CSB/SJU community truly showed up for these researchers. By utilizing the SJU men’s and CSB women’s cross country team members as the experimental group of those who exercise consistently, and groups of other male and female students who do not, the researchers were able to collect blood samples from both experimental groups before and after the influenza vaccine.

This campus-wide support was particularly meaningful to Fink.

“My favorite part of the research is working with Hannah and Jack, the participants and conducting experiments in the lab,” Fink said. “The sheer number of students who volunteered to provide blood samples and get vaccinated was such a fulfilling experience.”

Fink, Bock and Colleran have analyzed those blood samples by conducting a neutralizing antibody (nAb) assay, which measures the ability of the antibodies to protect the cells from infection and death by the virus. Their data suggest that overall, females have significantly higher antibody responses following vaccination as compared to males, and that individuals who exercise, particularly males, have significantly higher antibody responses than males that rarely exercise.

While neither one could have anticipated the current global pandemic when their research began, both student researchers agree that COVID-19 has made the study particularly relevant.

“Our research revolves around finding factors that could increase immune response to vaccination not only to the influenza virus, but to vaccines in general,” Bock said. “Public safety will always remain a priority, and thus so too will vaccine research and development which we hope to contribute to with our research.”

Colleran adds that their research could help understand the role of exercise in general health.

“Research on the impact of exercise on vaccine responses serves as a means to further understand its role in health at the biological level and to spread awareness to people of all ages in the wider community that exercise could be beneficial in ways other than weight loss or cardiovascular disease prevention,” he said.

Ultimately, the opportunity that CSB, SJU and Fink provided for these two students to conduct such relevant and technical research has shaped their college experiences and their plans for post-graduation.

From learning how to apply classroom skills to creating lasting relationships with each other, the two-year study has led to much more than just scientific findings.

“My favorite part of my research has been the relationships I have made and the doors that this opportunity has opened for me,” Bock said. “My mentor, Ashley Fink, has taught me so much over the years and fostered within me a new love for science ad respect for research. My colleague Jack and I have created a lifelong friendship created over hours toiling in the lab, trying to make sense of our data, and continually learning from one another in all realms of life.”

Clearly, this experience is one that has impacted Colleran and Bock. In fact, Colleran plans to apply to graduate school for a degree in genetic counseling, and cites this research as reinforcing his interests in biology and healthcare.

Bock will be continuing to pursue scientific research in New Zealand at the Auckland University of Technology, hopefully on a Fulbright Scholarship which she has applied for. 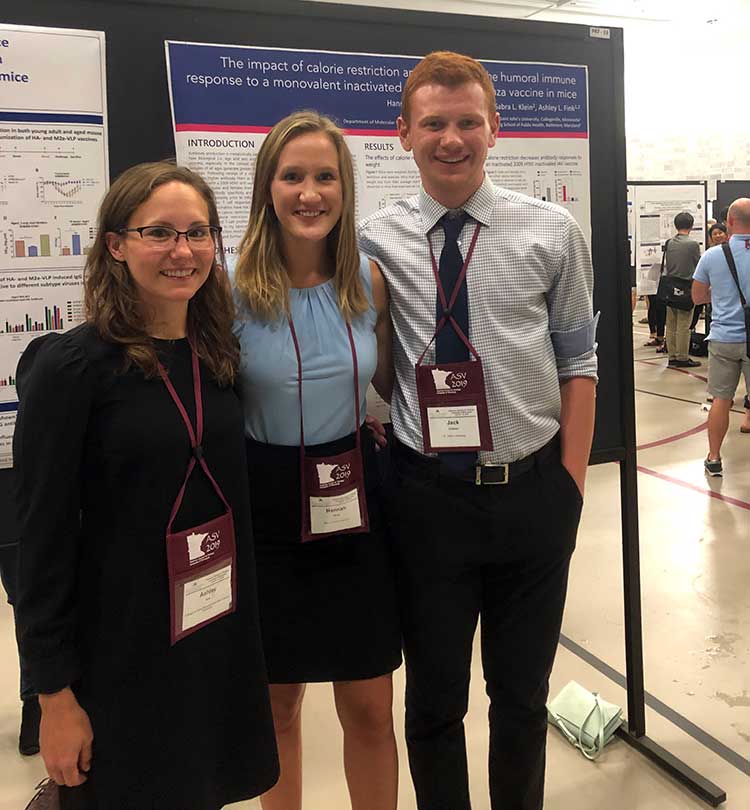