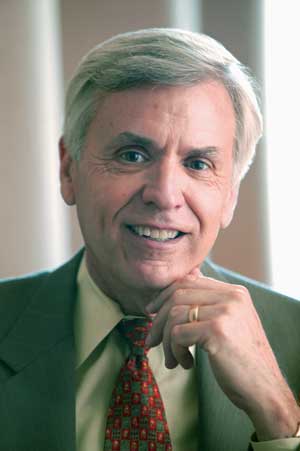 Bill Kling has always been interested in communication technology — and radio in particular.

"I first encountered the excitement of radio sitting in my grandfather's lap at age 3 or 4. He lived on a farm without electricity, but listened to his large battery operated radio that could pull in stations from around the country. It was magic," said Kling, a 1964 graduate of Saint John's University.

Kling hasn't strayed far from the dial, creating Minnesota Public Radio (MPR) and the American Public Media (APM) group. He also was one of seven founding directors of National Public Radio. More recently, Kling was one of 204 people elected to the American Academy of Arts and Sciences, announced April 23.

The group includes some of the world's most accomplished scholars, scientists, writers and artists as well as civic, corporate and philanthropic leaders. Kling was elected in the public affairs and journalism group.

"It's an unexpected honor," said Kling, who will be inducted into the Academy at a ceremony Oct. 11 at the Academy's headquarters in Cambridge, Mass.

Getting an opportunity at SJU

Kling, who received a degree in economics from SJU and a master's from the Graduate School of Communications at Boston University, has spent his career in public media and has been involved in nearly every aspect of its national development. He was the founding president of MPR — which began as classical radio station KSJR in 1967 in Collegeville — and APM, the national public radio network which serves over 900 public radio stations.

"When I arrived as a student, Saint John's had a student radio station (KSJU) that excited me," Kling said. "When I was about to graduate, Saint John's offered me the opportunity to start a public station by helping fund the first station in what became the MPR network at the college."

"Bill is a true genius and visionary," said Gary Eichten, a 1967 SJU graduate who worked for Kling for over 40 years at MPR as a news director, special events producer, station manager and host of MPR's "Midday" program. "It goes without saying that there would not be a Minnesota Public Radio or American Public Media without him, but I also don't believe there would be a national public radio system without him — certainly nothing like the public radio system we know today.

"Bill was instrumental in creating that system. He was also instrumental in building that system over the years. Every major innovation — fundraising, satellite distribution, decentralized national program production, entrepreneurial design, network development, etc., etc. — were the direct results of his efforts," said Eichten, who is the news editor at-large of MPR.

A love of mass communications

Kling received the Edward R. Murrow Award — the industry's highest recognition — from the Corporation for Public Broadcasting in 1981. He was asked if he considered himself a journalist.

"I am afraid that I love all aspects of mass communication, not just the technology of radio, the Web, and national and global distribution systems. I love the programs and the way in which those programs can inform audiences," Kling said. "I could have been a journalist, I suppose, since I am curious about trends in various fields and good story ideas. But the opportunity I had was broader - news, music, the arts, talent driven shows like those of Garrison Keillor and more."

Kling said he is most proud of the value that APM, MPR, Southern California Public Radio and Classical South Florida (two other networks he created) bring to their audiences.

"MPR, in particular, has been the link that connects the people of Minnesota in a way that nothing else does," Kling said. "I know from experience and many anecdotes from listeners that this has changed Minnesota for the better. I get enormous pleasure knowing that people in the smallest towns, or farms or in cities even in the farthest regions of the state, can hear and participate in a live orchestra concert like the one Osmo Vänskä declared to be his last this past winter, or be part of a statewide conversation on some issue of consequence."

"Bill has always been able to look around the corner, to imagine how things COULD be, rather than be satisfied with how things ARE," said Eichten, who added the emphasis on the words in his email. "He has never settled for second best. His drive for excellence was both maddening and exhilarating.

"Just when you thought you could rest on your laurels, Bill would come up with another daunting challenge. It was great! And, he pushed himself just as hard as he pushed everyone else," Eichten said.

On board with student learning

Kling, who is the president emeritus of APM and a current member of the SJU Board of Trustees, wants to help both entities in his retirement.

"I will continue to try to help APM and MPR see opportunities that are hard to see when you are in daily management. They know they are free to take or leave what I offer," Kling said. "And, I'll spend some time to help Saint John's and the College of Saint Benedict be effective as they explore a mission that is 'about the students' and student learning. Those two things bring me a sense of accomplishment for the moment."

One of the nation's oldest (founded in 1780) and most prestigious honorary societies, the American Academy Of Arts and Sciences is also a leading center for public policy research. Members contribute to Academy publications and studies of science and technology policy, energy and global security, social policy and American institutions and the humanities, arts and education.