Activism started at a young age for Betty Garcia Herrera.

Growing up in Worthington, Minnesota, she saw the difficulty her undocumented parents had filling out government or public utilities forms.

“It just bugged me, in a sense,” said Garcia Herrera, now a first-year student at the College of Saint Benedict. “I saw that there was a lack of communications with people of color and with translation. And, I knew that was what many other people faced as well.

“That kind of inspired me, too.”

Garcia Herrera continues that fight today. In early October, she attended an immigration reform march in Washington, D.C., and lobbied at the office of Minnesota Sen. Amy Klobuchar.

She is also a Poder Fellow working in the St. Cloud and St. Joseph, Minnesota, communities, an immersive paid fellowship for Latinx young adults who want to develop skills and experience to start or continue community organizing, build political power and advance immigration, education and environmental justice in Minnesota. The fellowship is offered through Unidos MN, an organization she became familiar with in Worthington.

That’s an impressive resume when you consider Garcia Herrera is 19 years old.

“I’m proud to be able to be a person who represents the people that don’t have a voice, just because of my legal status,” Garcia Herrera said. “My legal status gives me so much privilege that others don’t have. Those people are not able to speak up because they are in fear of (being deported).

“This immigration reform would bring so many benefits to many, just because they aren’t able to speak out. There are so many people that are passionate about this issue as well, but they just don’t have (the voice).

“I need to be a voice for them,” Garcia Herrera said.

Growing up in Worthington, a city in southwestern Minnesota, Garcia Herrera was a classmate of Saleen Thepmontry. Saleen’s mom, Jessica Lee Velasco, is the Southern Minnesota coalition director for Unidos MN.

Unidos MN (also known as Navigate MN) is a grassroots organization that builds power for Minnesota's working families to advance social gender, racial and economic justice for all, according to its website. Immigration, education and climate justice are at the core of its campaigns and centers on the lives of immigrant and first-generation youth, mixed-status Latinx families, GBLTQ and differently-abled folks.

“I was really inspired by her work,” Garcia Herrera said of Jessica Lee Velasco. “As I got to know her, she started inviting me to these events that she was a part of through Unidos.”

One of the events was the Freedom to Drive rally in April 2019 at the State Capitol in St. Paul. The rally was to show support for undocumented people living in Minnesota to gain a driver’s license.

“That was my first big experience (in activism) and I really enjoyed it,” Garcia Herrera said. “So, I continued my work with her.”

In November 2019, Garcia Herrera worked to pass a school referendum in Worthington on its sixth try.

“There was a bunch of students, with Betty being one of them, who door-knocked and worked a phone bank to push for the referendum. We won that,” Velasco said.

During that election, the Washington Post newspaper came to Worthington and wrote a story about the town being divided on the issue. The story featured bus driver Don Brink, who said in the story that he opposed the immigration system.

The story also included a note that the city received “more unaccompanied minors per capita than almost anywhere in the country,” citing data from the Office of Refugee Resettlement.

“After the publication of this article, I and my peers explained our concerns to Jessica. She encouraged us to hold a peaceful protest in front of the (Worthington school) administration building,” Garcia Herrera said. “This was just across the street from our high school. Many who showed up in support were people of color and explained that some felt a sort of feeling when they rode the bus.

“After holding the protest, we were invited into the office of the superintendent of our school, John Landgaard. We were excited to see our voices weren't ignored. He first stated that he was with us on this issue. He sees the diversity in our town and school. Unfortunately, he couldn't do anything in regard to the bus driver. Our bus driver was part of another company, and not (employed by) our school (district),” Garcia Herrera said.

In 2020, she took part in organizing a Black Lives Matter peaceful march in Worthington following the murders of Breonna Taylor in March in Louisville, Kentucky and George Floyd in May in Minneapolis.

It was later that year, during the 2020 election, that Velasco said she “really saw her (Garcia Herrera) shine and take the lead on things that needed to happen, and the impact it had on her. She was in a situation that normally most kids are not in. She knew she had to do her at least her part for herself, her family and the folks that she knew personally.”

This fall, she marched in an immigration reform march and then met with a member of Klobuchar’s staff and then the senator herself to listen to testimonials in early October. Garcia Herrera spoke on how Worthington residents – many of whom are undocumented immigrants – did not get the COVID-19 relief they needed.

“After we each gave our testimony, (Klobuchar) came in and told us she is supportive of this,” Garcia Herrera said.

It figures to be an active year for Garcia Herrera, with the mid-term elections coming 2022 and her fellowship continuing.

“I really hope she keeps going, because she already has so much knowledge and her personal story honestly has more value than just hearing experiences,” Velasco said. “She’s lived it. Honestly, I can’t wait to see what Betty does.

“I’d really like to see her run (for office) one day and not run alone – have women of color running alongside her so she doesn’t feel alone. She can really feel like she can change inside (politics) and be the support for other women that are doing the outside work. That’s what I see for Betty,” Velasco said. 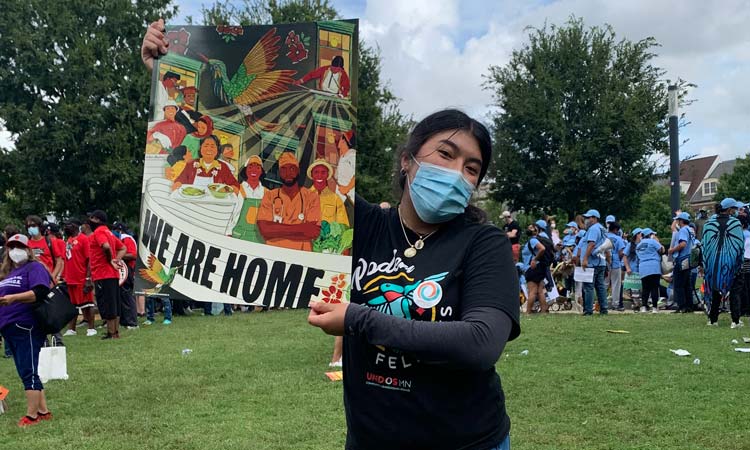 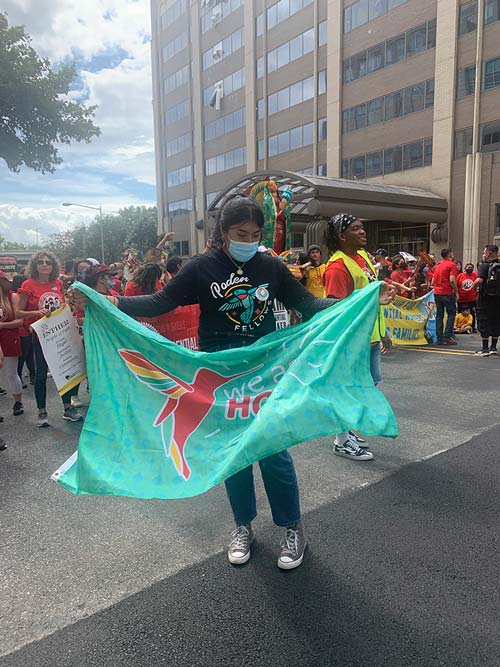