You take a bow at the end of any play or performance.

The Benedicta Arts Center of the College of Saint Benedict in St. Joseph took a bow Dec. 1 for its expanded performing arts facility affirming CSB’s leadership in the fine arts.

The expansion to the building was one of 10 projects that received an Honor Award by the American Institute of Architects Minnesota. The award was formally presented Dec. 1 at the Metropolitan Ballroom, Minneapolis.

The expansion was designed by Hammel, Green and Abrahamson (HGA) – the same firm that originally designed the BAC (the firm was then known as Hammel and Green). Although the BAC has received numerous design prizes since its opening in 1964, this is the first honor for the expanded facility.

“The new BAC will facilitate our students’ mastery of theatrical, musical, visual arts and dance skills,” CSB President MaryAnn Baenninger said Sept. 16, during the dedication and blessing of the new space. “This rich variety of venues will inspire a new burst of creativity.”

A total of 130 projects were submitted for consideration for the Honor Awards. The projects must be completed and designed by AIA Minnesota members or firms.

“The addition has the same DNA as the existing modernist building, but it’s also different,” said the three-person jury which evaluated the nominees for the Honor Award. “The design is simple but very efficient, with a consistent quality from inside to out.”

The $8.9 million expansion and renovation was a component of the CSB Capital Campaign, “Our Place in the World, A Campaign to Inspire and Transform.” The BAC is now comprised of 173,000 square feet of creative space including:

The addition of these performance and rehearsal spaces allows for expansion in the academic and public programming for CSB. Longer extended residences with visiting artists in dance and theater will be possible as well as year-round programming in multiple theater spaces. In addition to classes, lessons and student performances, the BAC hosts 200 public events each year, including being the only venue outside of the Minneapolis/St. Paul metro area offering an annual Minnesota Orchestra series.

“The BAC is the gateway building to the campus. As such it is a defining element, along with the Mall, of arrival. The design of the expansion strengthens the experience of arrival by giving more built definition to the Mall while bridging the stand alone BAC to the rest of campus,” said Tim Carl, vice president at HGA who was the lead design architect for the BAC expansion.

“While the design of the original (BAC) is revered, its opaque monastic walls hide activity and the identity of programs within. The expansion provides a more visible and compelling presence for the arts on campus,” Carl said.

The Honor Awards program, a tribute to architectural excellence, encourages a high level of architecture, recognizes the clients and architects who have distinguished themselves, and informs the public of these important architectural contributions, according to AIA Minnesota.

A delegation from the College of Saint Benedict and HGA accepted the award on Dec. 1.  Representing CSB, from the right: Colman O'Connell, OSB, Jim Fredricks, and President MaryAnn Baenninger (Photo courtesy of AIA Minnesota) 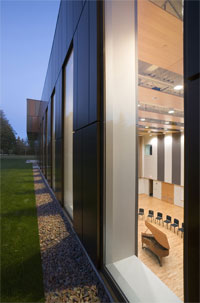 Looking into a new rehearsal studio at the BAC (Photo credit: © Albert Vecerka/Esto)

An outside view of the north side of the newly expanded and remodeled BAC (Photo credit: © Albert Vecerka/Esto)