CSB President MaryAnn Baenninger will step down in June 2014 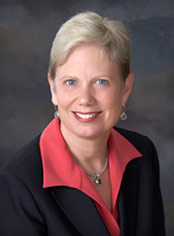 MaryAnn Baenninger, 14th president of the College of Saint Benedict (CSB), has informed the CSB Board of Trustees that she will step down from the presidency on June 30, 2014, at the conclusion of her 10th year.

"I've made the decision that this is the right time for a transition for me and for Saint Ben's," Baenninger said. "We will have concluded our centennial celebration year and a very successful decade for the college. My husband Ron and I are also ready to be closer geographically to our children and grandchildren at this point in our lives.

"We will forever love and remain connected to the wonderful community at Saint Ben's, and in Central Minnesota. I am exceedingly proud of the many accomplishments during my tenure and grateful to all who have supported me and the aspirational vision I have had for the College of Saint Benedict. I extend a special thank you to the Board of Trustees, the CSB Cabinet, and our faculty and staff for joining with me to provide an exemplary liberal arts education for our students."

Baenninger remains open about her future plans, but plans to live in proximity to family.

The CSB Board of Trustees will begin a search immediately, with the expectation that a new president will take office on July 1, 2014.

"The college's accomplishments under MaryAnn's leadership are too numerous to list comprehensively," said Lynn Newman, chair of the CSB Board of Trustees. "She has elevated the college nationally, financially and academically in extraordinary ways. She has been a champion for our students and passionate about our mission as a residential liberal arts college. The legacy MaryAnn leaves will reverberate throughout the next century of the college."

Baenninger began at CSB on Aug. 1, 2004. She leaves CSB in a strong and healthy position. Some of her accomplishments include:

Rita Knuesel, provost and a CSB alumna, recognized Baenninger for her leadership and support of the academic program, and faculty governance and development.

"MaryAnn's vision to be among the best liberal arts colleges in the country is reflected in her commitment to the highest quality academic offerings and support of a talented and engaged faculty," Knuesel said. "Under her leadership we completed a very successful North Central Accreditation 10-year review, reshaped the Common Curriculum to include an experiential learning requirement for all students, implemented a very competitive faculty salary benchmark plan, and introduced a successful faculty senate model of shared governance. I feel very privileged to have served under MaryAnn's leadership."

Baenninger's leadership at CSB has been recognized with local and national awards. In 2010, she was honored by the Minneapolis/St. Paul Business Journal as an "Industry Leader" at the Women in Business Awards, and in 2013, she received the William M. Burke Presidential Award for Excellence in Experiential Education, presented by the National Society for Experiential Education.

Baenninger was a charter signatory of the American College and University Presidents' Climate Commitment, leading a group of now 675 college and university presidents in formally committing to sharply reduce and eventually eliminate all of the college's global warming emissions. In 2013, Baenninger received an honorary doctorate and bachelor's degree from the College of Saint Benedict.

"The College of Saint Benedict is a stronger, healthier and more vibrant institution because of the leadership of President Baenninger," said Michael Hemesath, president of Saint John's University. "I am personally thankful to MaryAnn for her generosity, kindness and wisdom in my first year on the job. Furthermore, Saint John's University is a better institution because of the ways in which she challenged and encouraged us to look at our educational mission and our relationship with CSB in different ways."

"The Board of Trustees is appreciative of MaryAnn's remarkable tenure and I extend my thanks to her on their behalf," Newman said. "We are committed to an open and comprehensive search process that will attract the best candidates to the position."

Newman and Barbara Melsen, trusteeship committee chair, will co-chair the presidential search, and the search committee will include representatives from all constituencies of the college.

Campus updates regarding the search will be posted on a dedicated website that will go live in the near future.

"MaryAnn's leadership will have an enduring impact for generations to come," Newman stated. "I am optimistic about the future of Saint Ben's as we conclude our first century and move into our second century of high-quality education for women because of MaryAnn's decade of service."