Home / Newsroom / CSB graduate wants to change narrative of how city, state describe themselves to others

CSB graduate wants to change narrative of how city, state describe themselves to others 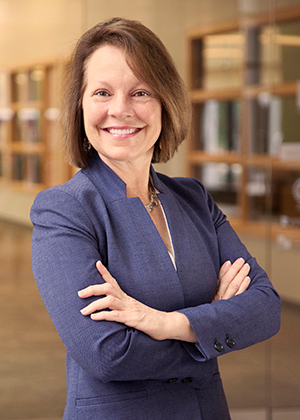 Being an insular community has its advantages, Brenda Kyle knows.

But there are disadvantages as well, and the president and CEO of the Saint Paul Area Chamber of Commerce is making it one of her goals to change that.

“One of my priorities at the Chamber, a quiet priority but one you will continue to see me execute on, is changing our narrative,” said Kyle, a 1986 graduate of the College of Saint Benedict who assumed her new position with the Chamber Aug. 1. “How we talk about ourselves matters, and we all need to do a better job of pointing to the tremendous possibilities in our region.”

The new Treasure Island Center in downtown St. Paul is an example of changing that narrative, Kyle believes. The Center, which is expected to open in December, will feature a rooftop ice rink that will serve as the new practice facility for the Minnesota Wild.

“Our community is insular in that we are connected; many of our families have a long history here,” Kyle said. “This gives us an extraordinary advantage to compete, because we already know each other and we can work together.

“As I see it, the primary disadvantage of an insular community is the potential lack of a current sense of how we actually compete in the global marketplace, because we compete quite well, and we need to do a better job of telling that story,” Kyle said.

“The challenge, then, is to hold onto our connections while remaining open to the art of the possible. As Socrates said, ‘The secret to change is to focus your energy. Not on fighting the old, but on building the new.’”

That’s one of the reasons she’s so excited about the Treasure Island Center. The Center formerly was home to Macy’s, but the department store closed in March, 2013. While its parking ramp remained open, the five-story, yellow brick building in the heart of the city sat vacant.

That’s where Kyle and the Saint Paul Port Authority stepped in. As the senior vice president of strategic development at the Port Authority, Kyle worked with the Wild in redeveloping what had been a big box retail building with no windows.

By December, the NHL team will begin practicing on a new rink on the roof of the building (Hamline University also has announced it will play home games at the site). The lower floor of the building is being turned into the Wild’s “man cave,” as Kyle calls it, with locker rooms, coaches’ rooms and training areas, including a weight room, 40-yard dash bays and reparative and training pools. There also will be retail space on the skyway level of the building, including a Walgreen’s and Tim Horton’s Doughnuts.

“The development of Treasure Island Center has been an exercise on ‘building the new,’” Kyle said. “For the longest time, the local development community saw only a potential parking ramp. The Port Authority was having trouble finding anyone who could believe in — and take a chance on — the possibilities of the building.”

“So the Port Authority and Lee Krueger, our out-of-the-box thinker and president, proposed, ‘How about a hockey rink on the roof (of the building)?’ Believe me, even the Minnesota Wild were skeptical at first.”

“And so, the message of the Treasure Island Center is one of possibility, ‘If it should be, than it can be,’ according to my friend, business entrepreneur and Saint Paul enthusiast Scott Burns.”

“In fact, the very first public event at Treasure Island Center, on Jan. 2, 2018, will be a Saint Paul Area Chamber event – a family skate and tour of the building.  I can’t wait to usher in the future in this building,” Kyle said, smiling.

Kyle served in the U.S. Army in West Germany from 1986-1990, after being a cadet in the ROTC program at CSB, SJU and St. Cloud State University. After her discharge, she worked in sales and capital finance before joining the Port Authority in 2006.

“I would say I wasn’t terribly strategic about my career path for a long time. I call it divine intervention that provided me so many tremendous, successful opportunities,” Kyle said. “So, I worked hard but I can’t say that I had a strategic vision.”

Except for that yellow brick building in downtown Saint Paul.