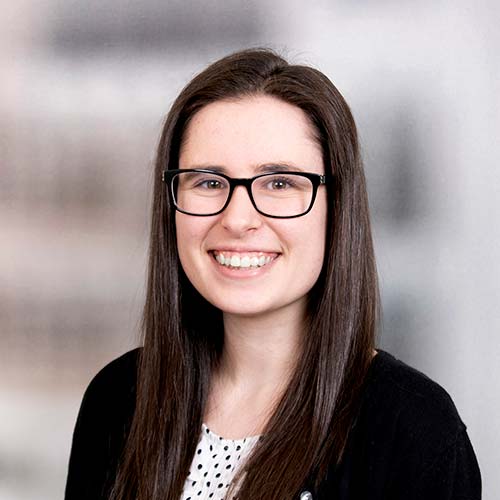 “She (Jepperson) was one of the only accounting professors who I did not have a class with,” Fursa said.

Fursa, a 2017 graduate of CSB, was one of 110 certified public accountant candidates across the country to earn the 2018 Elijah Watt Sells Award. She is the first CSB graduate to receive the honor since Jepperson won the same award in 1980.

“Winning the Sells Award is an extremely impressive accomplishment for any CPA candidate,” said Mike Decker, vice president of examinations for the American Institute of CPAs. “The CPA Exam is a rigorous assessment and these candidates are commended for an exceptional performance that very few individuals achieve.”

How few? Nearly 86,000 individuals sat for the CPA Exam in 2018, meaning that about one-tenth of one percent of all candidates met the criteria to receive the Sells Award.

None of which surprised Boz Bostrom, her adviser and an associate professor of accounting at CSB and SJU.

“She (Fursa) was a model student – prepared, engaged and a mentor to her peers,” said Bostrom, thinking back to when he met Fursa in his Financial Accounting course in the fall of 2013. “She was the top student in a very competitive and high-performing class.

“There was never any doubt that Amy would do well on the CPA exam, almost certainly passing all four parts on her first attempt,” Bostrom added. “However, since it had been so long since we had a Sells Award winner, we didn’t focus on that or encourage her to take a run at it.”

“She makes us all proud,” Jepperson added.

Right back at you, according to Fursa, who is now a tax accountant at Ernst and Young in downtown Minneapolis.

“I think we (CSB and SJU) have great professors, and great one-on-one mentoring and teaching,” Fursa said. “I would walk right in to my professor’s office if I had questions and they were helpful, not only in answering my questions about the assignment, but also about my career and even the CPA Exam.”

For even the smartest, most prepared would-be CPAs, the exam is a bear. The first-time pass rate hovers around 50 percent from year to year.

The test consists of four parts: Financial Accounting and Reporting; Regulation; Audit; and Business Environment and Concepts. Once you pass the first section, you have 18 months to complete the remaining three sections.

“During the summer, before I was working, studying was my full-time job,” Fursa said. “After I started working, I studied every single weekend, eight hours a day.”

“I wanted to get the most difficult one out of the way first,” Fursa said, noting she scored a 98 on that section.

“I had never heard of the award before I started taking the exam,” Fursa said. “But then, after I took my first exam and had done fairly well, someone had mentioned that I might have a chance to win the award.

“I looked at the award to see the requirements, but at that point, I was more concerned about passing and becoming a CPA,” Fursa said.

She did the Audit test next, and posted a 94 – what would be her lowest score of the group. Fursa followed that up with identical scores of 96 on the final two sections to average 96 over the four sections.

“I took the first section of the exam before I started working (at Ernst and Young),” Fursa said. “All the other sections I took while I was working. That was something I had to balance and learn how to work and study at the same time. The test I did the poorest on, my lowest score, was the first one I took after I started working.”

Fursa credits her liberal arts education at CSB and SJU for helping her get to where she is today.

“What I really appreciate about the liberal arts is, I was able to major in accounting and also minor in theology, which are two very different studies,” Fursa said. “This has given me a wider skill set, and a broader ability to think beyond just accounting.

“I think Saint Ben’s and Saint John’s has the best of both worlds in that we have a great accounting department. We have all the Big Four accounting firms (KPMG, Ernst and Young, Deloitte and PricewaterhouseCoopers) recruit at Saint Ben’s and Saint John’s, which is something that happens at the ‘U’ (University of Minnesota), but it doesn’t happen at every small, liberal arts school.

“We have a great accounting program, but we also then we also have had so many other opportunities beyond accounting. I studied abroad in the Roman-Greco program. Saint Ben’s was definitely such a great aid in passing these exams,” Fursa said.

The sky is the limit for Fursa, Bostrom said.

“Certainly she is brilliant, but in addition to book smarts, she does a great job with the key skills of critical thinking, writing and effectively using technology,” Bostrom said. “It will be interesting to see if she chooses to pursue partnership within a major CPA firm, a role as a chief financial officer with a major corporation or something completely different.

“But, the choice is hers. Whatever path she chooses she will be wildly successful at,” Bostrom said.