The Saint John’s football team won’t begin its season for over another month.

But one member of the CSB/SJU community will be playing for a national title on the gridiron this coming weekend.

Allyson Klenke, a 2010 graduate of the College of Saint Benedict, is in her fourth season as a nose guard for the Minnesota Vixen, a professional women’s football team based in the Twin Cities.

The Vixen are 8-0 this season (counting the playoffs) and take on the Boston Renegades in the Women’s Football Alliance’s Division I national championship game at 5 p.m. (CDT) on Saturday, July 24 at Tom Benson Hall of Fame Stadium in Canton, Ohio (the site of the NFL’s annual preseason Hall of Fame game).

The game will be broadcast on Direct TV channel 623 Next Level Sports or on the website/Roku and streaming devices  via their For the Fans (FTF) brand.

It’s a big moment for the franchise, which dates back to 1999, making it the nation’s longest continually operating women’s football team. But the Vixen are still relatively new to the Division I level – the highest classification in women’s tackle football.

The team actually moved up to the Division I level in 2017, but then returned to Division II in 2018 and ’19 (the 2020 season was cancelled due to COVID-19) before returning to Division I this year.

“It’s super-exciting to be part of this,” said Klenke, a Paynesville (Minnesota) High School graduate who was a member of the track and field team during her time at CSB. “We’ve been working so hard this summer and everybody is really thrilled to have the opportunity to go and play in the national championship game.

“We just moved up to Division I, so it’s nice to get the validation that it was the right move and we belong at this level.”

The team is a mix of players from many different backgrounds. Ages range from 18 to 48 years, including some players who are mothers and even a grandmother. They all balance the demands of a competitive pro football schedule with those of their day jobs.

“We’re all one big family,” said Klenke, a customer service representative at Allianz. “At the end of each practice, we have a big huddle and we all put our hands in and say ‘1-2-3 Vixen. 4-5-6 Family.”

Klenke graduated from CSB with a double major in art and communication. She said she has always loved sports, including football which she played and watched growing up.

“We had a group of kids in our neighborhood who always got together and played all sorts of different sports depending on the season,” she recalls. “We played a lot of football in the fall and I loved it. Even when I was little, I can remember begging my parents to let me stay up and watch Monday Night Football.

“I always loved (former Rams and Steelers running back) Jerome Bettis. He was my favorite player because he’d just run over people.”

Klenke played basketball and softball in high school, but went out for track at CSB after discovering she had an aptitude for the hammer throw. She also served as the team manager and DJ for the CSB softball team during all four of her years on campus.

“I took tickets for the volleyball games,” she said. “I helped at soccer games. I went to all the Saint Ben’s basketball games, and to all the Johnnie football games on the weekends in the fall. I just loved being around sports.”

She continued to seek athletic outlets after graduation, playing for a time with the Saint Cloud Area Roller Dolls, a local roller derby team in Central Minnesota. But after she moved to the Twin Cities, she found getting back to St. Cloud for practices more difficult.

It was her boss at the time who told her about the Vixen and encouraged her to try out.

“She said she had a friend who played on the team and she thought I’d be good at it,” Klenke said. “So I looked it up and it just so happened they were about to hold tryouts. She told me she’d sponsor me if I made the team, so that gave me a little extra motivation.

“Everything seemed to line up.”

Klenke has been with team ever since. She was named the Vixen’s most improved player in the 2019 season.

“Allyson is someone who can always be counted upon to show up, do her job and has a great understanding of what we're trying to do as a defense,” Vixen head coach Ryan McCauley said. “So (she is) able to help our younger players understand their assignments and responsibilities as well as handling her own.”

But Klenke is not the only member of the team with ties to CSB/SJU.

Jesse Haas is a graduate of Creighton University where she played soccer. But her father Mike Doran ’71 and her brother Ben Doran ’00 both participated in sports at SJU. Her uncle Dan Ceynowa ‘71, meanwhile, played football for former Johnnies head coach John Gagliardi.

His seven interceptions in 1969 still tie him for the eighth-best single-season total in program history.

“I’ve been to Saint John’s many times over the years,” Haas said. “My Dad and uncle run St. Patrick’s Guild (a church supply and religious gift store) in St. Paul. So we made business trips up there all the time when I was growing up. I remember the Johnnie Bread and going over to the (refectory) to eat soft-serve ice cream.

“My Dad is still involved up there. He’s taken my sons to football games and things like that.”

Haas, 40, is in just her second season with the Vixen.

“I was at a local festival and the Vixen had a booth there,” said Haas, who serves as the National Director of the Therapy Animal Program for the non-profit Pet Partners.

“I was with my husband and my two sons. I had to show my sons that girls can do anything boys can do. So I signed up. I went to the tryouts and made the team, and it’s been a really incredible experience.”

Especially this season when the Vixen have averaged 48.7 points per game while allowing their opponents an average of just 8.9. The team beat the Cali War 33-22 in the conference championship game on July 10 at Edina High School (the team’s regular home field is at Concordia-St. Paul).

But the Vixen face a steep challenge in the Renegades, the two-time defending national champions (in 2018 and ’19, there was no season in 2020 due to COVID-19). Boston defeated the Tampa Bay Inferno 55-3 in the other conference championship game and is averaging 59 points per game while allowing an average of just 2 ppg (surrendering a total of 12 points total in six games this summer).

Not only that, but the team has the support of New England Patriots team owner Robert Kraft, who is providing the use of the Patriots team plane to fly the Renegades to and from Canton for the national championship game.

“We definitely have that underdog mentality,” Klenke said. “We know how good a team Boston is and how much they’ve accomplished. But we’re going into this game well-prepared. We feel like we can play with any team out there. So we’ll be ready to go.”

Allyson Klenke (94, second from left) and the Minnesota Vixen take on the Boston Renegades in the Women’s Football Alliance’s Division I national championship game at 5 p.m. (CDT) on Saturday, July 24 at Tom Benson Hall of Fame Stadium in Canton, Ohio. 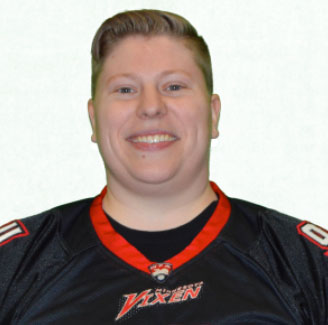