“This national recognition affirms the exceptional student leadership and civic engagement of the CSB and SJU Votes Coalition and all students who participate in elections,” said Matt Lindstrom, Edward Henry professor of political science and director of the Eugene J. McCarthy Center for Public Policy and Civic Engagement.

“College student voter turnout has increased since 2016, and this increase has been driven by students. The ALL IN Campus Democracy Challenge is excited to expand our ALL IN Student Voting Honor Roll to recognize these student voting champions across the country,” said Jennifer Domagal-Goldman, executive director of the ALL IN Campus Democracy Challenge. “These students registered voters, served on their campus voting coalitions, spearheaded voter education efforts, advocated for campus polling locations and organized other voter engagement efforts to ensure their peers were confident and informed voters. We are excited to see what they continue to accomplish ahead of the 2022 midterms.”

ABOUT ALL IN Campus Democracy Challenge:

ALL IN, in collaboration with over 960 higher education institutions, seeks to make participation in local, state, and federal elections a social norm; substantially increase the number of college students who are democratically engaged on an ongoing basis, during and between elections, and not just at the polls, and; make educating for democratic engagement on college campuses an accepted and expected part of the culture and curriculum so that students graduate with the knowledge, skills, behaviors, and values needed to be an informed and active citizen. 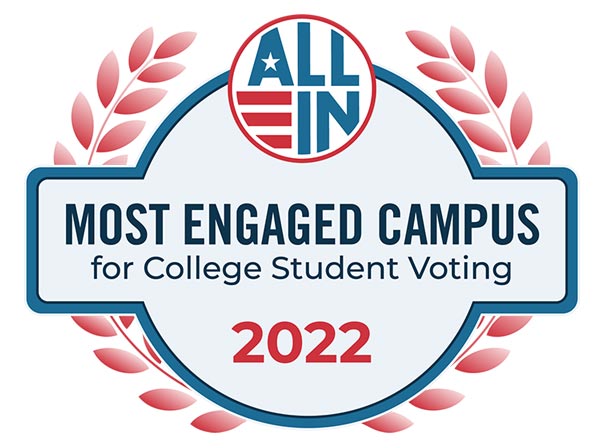