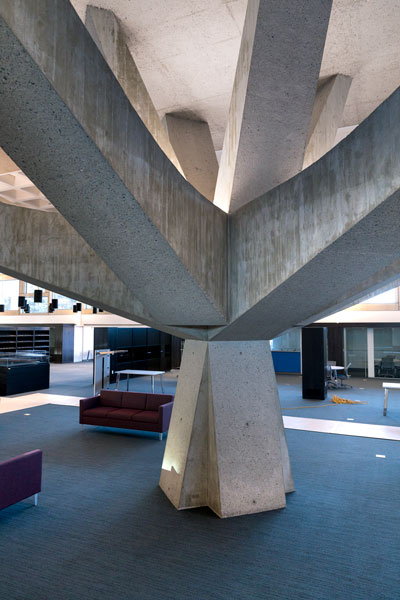 Trees of knowledge are firmly rooted inside Alcuin Library, but at the same time their branches are constantly reaching out.

Pulling it all together.

Michael Hemesath ’81 felt that pull as a Saint John’s University undergraduate student, even though you couldn’t see those trees from outside Alcuin’s walls.

“It was absolutely the academic center of the place,” Hemesath said. “You’d go there in the evening and it was packed with people.”

Hemesath feels the pull even more strongly now, and not just because he’s SJU's president.

Those walls are now windows, welcoming abundant light on those trees and generating new energy.

Alcuin has been transformed. And on Monday, Feb. 20, all levels of Alcuin Library were open for students, faculty and staff.

“I think I see more than I saw as a student,” Hemesath said. “I see an integration of the educational experience here.

“Those trees — they are the center for many of our students.”

They’re also the center of a long-awaited $25 million library renovation project that will help strengthen the Catholic intellectual tradition that emphasizes faith and reason.

“It’s that vision that’s been sustaining us all along,” said Kathy Parker, director of libraries, media and archives at the College of Saint Benedict and Saint John’s University.

“We want to respect, honor and preserve those parts of our history,” Hemesath said, “but do it in a way that recognizes that our students and their parents expect a 21st century education. 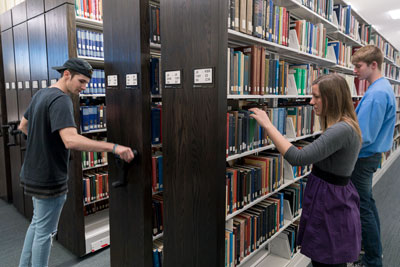 The construction project also includes the addition of a 22,000-square-foot Learning Commons, which is being named in memory of former Saint John’s president Br. Dietrich Reinhart ’71, OSB.

It pulls together essential student services and provides a myriad of options in a campus hub that reflects dramatic changes in technology and education.

It embraces the surrounding aesthetics of the Abbey and University Church, Clemens Stadium and Science Center, along with a sense of place faithful to the original design of architect Marcel Breuer.

“The design before definitely didn’t highlight those trees of knowledge,” said SJU senior Dylan Jackson, who helped move 20 truckloads of books during renovation.

“We opened up the view to the Abbey Church, and we opened up the view out back (toward Clemens Stadium),” Parker said. “There’s much more natural light coming in, and also this very clear visual link to the spiritual life of the campus and creation.”

In order to make it happen, Saint John’s first had to answer some questions.

The first was this: Why do it?

“We had many people who said, ‘Why would you invest in a library now?’” Parker said. “I think we’ve answered that question well, and compellingly.”

The answer is threefold.

“These are the drivers for us – the information technology and information revolution, changing pedagogies and student services help,” Hemesath said.

“It’s related to trying to meet students where they are and making their learning experience better.”

Changes accentuate space and interaction, consistent with changes in the way classes are taught and students learn.

“That’s where the library is changing with education pedagogy,” CSB/SJU Provost Richard Ice said. “Now, having group assignments is key. That’s the way the world works.”

The silent, individually focused library of the past needed to change with the times.

“I think that’s where our education system is going,” Jackson said. “We’re big advocates for group work and discussion-type learning.”

“We’ve seen dramatic changes in the way faculty teach and students learn,” Parker said. “We see a lot more collaborative work, group projects, students working with each other in an interactive way.”

Her workplace had to make an equally dramatic change.

“Maybe it’s a bit of a social center,” Parker said, “with an academic twist to it.”

Alcuin originally opened in 1966. Discussions about renovation began in the 1980s, and it nearly happened nine years ago.

“In 2008, we had a really big plan for this space that even included a parking garage,” Parker said. “It was a $60 million project – right at the time the economy went in the tank.”

That delay may have been a blessing. The project went back to the drawing board and returned with renewed emphasis on what was most important for students.

Reinhart, who died in 2009 after stepping down from a distinguished 18-year career (1991-2008) as Saint John’s president, was the inspiration.

“He really was the driving force in saying we need a 21st century library,” Ice said.

“He’s the big-picture brains behind this,” added Hemesath. “He’s the one who recognized that this central piece of Saint John’s had started to not serve us as well as it needed to.” 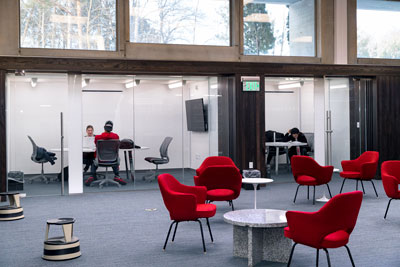 Parker was the enabler, overseeing a complex project that literally turned her workplace inside out.

“She’s a saint,” Hemesath said with a grin. “This project has been going on for more than a decade. Kathy has been so patient and understanding.”

Ice was the facilitator, steering the project and figuring out ways to make it work.

“Richard came in and said, ‘We’ve got to do this. You can’t put this off any longer,’” Parker said. “It feels like he lit a few firecrackers under people.”

Ultimately, Hemesath was the decider willing to advocate for the financial commitment.

“Michael was persuaded and moved by Br. Dietrich’s commitment to this project,” Parker said, “and decided to champion it — both with potential donors and in making the case for why this was so important.”

“The only thing I would give myself credit for,” Hemesath said, “is saying that this project was getting past its freshness date. We needed to make it happen.”

Last May, those 20 truckloads of books headed for a warehouse in St. Cloud. They’re all back now, stored in space-efficient compact shelving and painstakingly reorganized.

“The job title initially was ‘book un-packer,’” Jackson said. “I didn’t realize it was lifting 50-pound boxes and then unpacking the books.”

Books were available when spring semester began in January, and the main level was opened Feb. 20.

When the Learning Commons is complete, Alcuin will have over 100,000 feet of space for a myriad of uses — and no more construction.

“I’m a person that doesn’t tolerate chaos very well,” Parker said with a smile. “I like things orderly. It comes with the job.”

WATCH A DEMO OF THE NEW HIGH-DENSITY SHELVING

The first word Parker learned at library science school may very well have been “sssh.”

Now, she’s encouraging the opposite.

“Conversation is one of the major frameworks for the way we’re arranging the space,” Parker said. “Now, instead of ‘sssh, you’re in the library,’ you’re in a place where you’re expected to interact with your peers.”

“On campus, Alcuin for sure is viewed as the ‘quiet’ library, and Clemens is the library where everyone talks,” said CSB junior Emily Webster, manager for Johnnie Bennie Campus News.

“It’s kind of the preferred choice because of that. But I think this will really give more traffic to Alcuin.”

That’s just one attraction in the redesigned library.

“The goal is to have a one-stop shop for student learning,” Hemesath said.

“This isn’t supposed to be the academic mini-mall,” Parker said, “but in fact there’s close collaboration and coordination of services, elimination of redundancies, and greater consistency of expectations by having everybody here in this place.”

Parker envisions a dynamic campus hub with librarians helping students and faculty use a spectrum of services — media technology, IT services, the writing center, English as a second language services, and student accessibility services.

“The media help will be there, the writing help, the math help — really everything a student needs is right there,” Webster said. “I think it’ll be a huge benefit.”

The Saint John’s Bible exhibition gallery will open in the fall. So will “The Schu,” a coffee shop in the Learning Commons named after the Don ’65 and Kitty Schumacher CSB ’66 family.

All of it incorporates Breuer’s original vision.

“When Breuer designed that space, he had a certain set of thoughts in mind,” Hemesath said. “He had a vision of how the academic piece and our Catholic/Benedictine piece fit together. We absolutely need to preserve that.

“That’s who Saint John’s is. That’s what makes us unique.”

Branches of those trees of knowledge are more prominent now, and more vital.

“We absolutely need our students to understand when they leave these places how to filter that kind of information,” Hemesath said, “how to know what’s quality information and what’s garbage.”

“In the era of fake news,” Parker said, “who’s going to teach students to be more discerning?”

Alcuin will still feature quiet spaces for individual study. But it also will pull in the world around it, the past and the future.

“There’s always that vision of the abbey in there, and to remember your Benedictine values and Catholic views,” Jackson said. “That’s what the school is always trying to incorporate.”

“The library is right there,” Parker said. “We have faith, reason, creation.”

That’s exactly what those trees are reaching for.