20th anniversary of &ldquo;Celebrating the Season&rdquo; Christmas concert at the Basilica of Saint

The College of Saint Benedict and Saint John’s University will mark their 20th anniversary of “Celebrating the Season,” at 8 p.m. Saturday, Dec. 2, at the Basilica of Saint Mary in Minneapolis.

This year’s Advent and Christmas concert also commemorates the sesquicentennial year of the Order of Saint Benedict’s establishment in Minnesota and the 250th anniversary of the birth of Wolfgang Amadeus Mozart.

Music with special significance to both the College of Saint Benedict and Saint John’s University will be featured in this performance, including two movements of the “Missa de Angelis,” a setting of the traditional Latin Mass based on the Gregorian chant Mass by the same name, by Minnesota composer Paul Felter. “Missa de Angelis” was commissioned by Saint John’s in the late 1970s to honor the 1500th birthday celebration of Saint Benedict in 1981.

Mozart’s “Inter Natos Mulierum” will be performed by the CSB Campus Singers, CSB/SJU Chamber Choir and SJU Men’s Chorus, accompanied by the Amadeus Chamber Symphony. It was originally written for the Austrian Benedictine Abbey of Seeon. The text is taken from the Offertory for the Feast of John the Baptist, patron saint of Saint John’s Abbey and University.

There will be opportunities throughout the concert for audience members to join in singing a number of favorite Christmas carols, such as “O Come All Ye Faithful,” “Stille Nacht” and “Lo, How A Rose.” Other treasured favorites will include “Personent Hodie,” “Gaudete,” “Glory of the Father” and Handel’s “Hallelujah Chorus.”

A special donation to Catholic Charities of Minneapolis and The Dorothy Day Center of St. Paul will be made on behalf of CSB/SJU.

Doors open at 7:30 p.m. Tickets are $15 for adults and $10 for seniors and children 12 and under. Tickets are available online.  Pleae note, senior, children and student discounts are not available online.  Tickets can also be purchased through the CSB/SJU Fine Arts ticket office at 320-363-3577.  This event has historically sold out, and advance ticket purchase is strongly encouraged. 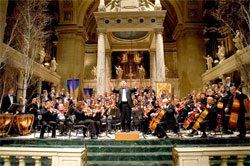