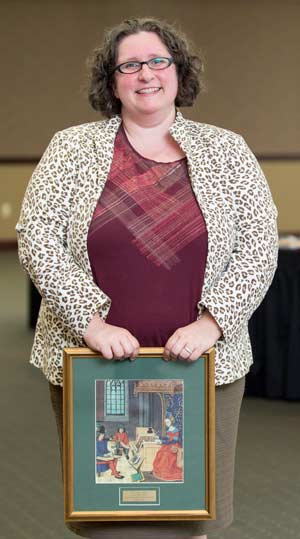 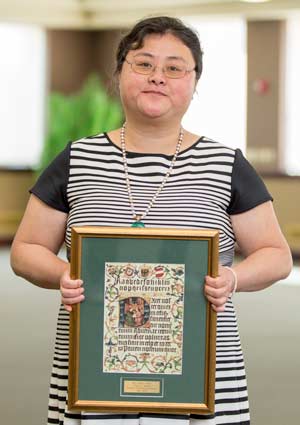 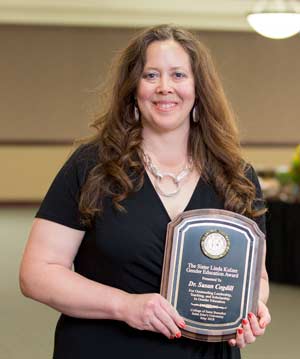 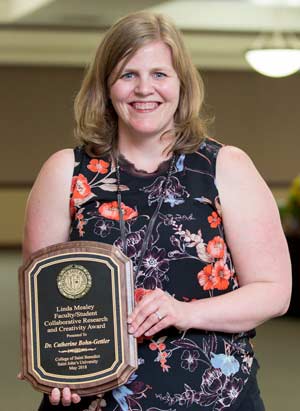 Faculty and staff members from the College of Saint Benedict and Saint John's University were honored at the Academic Affairs Awards and Recognition Ceremony May 7 at the Gorecki Center, CSB.

The S. Linda Kulzer Gender Educator Award was awarded to Susan Cogdill, assistant professor of music and education at CSB and SJU.

The Academic Affairs Awards Ceremony also recognized faculty for years of service, promotions and contributions as department chairs and leaders.

Grell, a noted biologist who was a 1933 graduate of CSB, served students at CSB and SJU for more than 35 years with intelligence, dedication and affection. Her lifetime of teaching at CSB is celebrated through the recognition of a faculty member who represents the best teaching and learning at CSB and SJU. S. Grell served as president of CSB from 1963-68. This award has been presented yearly since 1995.

Sinko, who has taught at CSB and SJU since 2011, is described as a master teacher who uses innovative methods that enable her students to succeed. Her teaching philosophy revolves around discovery – discovery of mathematics, ideas, abilities and potential within one’s self.

Sinko uses an Inquiry Based Learning pedagogy in her courses to achieve her goals of having students think deeply about mathematics and to get students to collaborate with their peers.

“Not only has she given me a deep understanding of the subject material in class, but she has also given me an appreciation of mathematics as a discipline and prepared me for lifelong learning,” a student commented.

Geng is known as a creative teacher, dedicated mentor and collaborative researcher. She is known to use a variety of activities and teaching tools to engage her students inside and outside the classroom.

“Teaching should be an interactive engaging process that centers on the holistic development of the students,” said Geng, who has taught at CSB and SJU since 2007. She believes a teacher should serve as a guide and facilitator in the classroom and as a mentor and adviser out of the classroom.

“She upholds the missions of the colleges with her devotion to her students, her eagerness to bring something of her part of the world to our campuses, her energetic speaking schedule all over this country and her own, and willingness to spread her talents and knowledge beyond her own courses and own department,” a colleague said of Geng.

Cogdill’s service and scholarly work focuses strongly on gender education. In her five years on campus, she has made extraordinary strides with the CSB Women’s Choir, increasing the community visibility of the group and creating a safe, creative environment for young women to nurture self-esteem and a sense of community.

This year, Cogdill took on a project to help members of the Women’s Choir “Find Their Voices Within.” Cogdill uses a circle singing/improvisatory singing and traditional choir singing to grow awareness of who they are as women, what voices have guided them to this point in their lives and to process what that voice is for their future lives as well.

Bohn-Gettler has made a significant impact on her students and colleagues. In her first semester at CSB and SJU (fall of 2014), she developed an education class in which she works collaboratively with a small group of students to conceptualize research studies, collect and analyze data, interpret results and present and publish their work.

“She was the first teacher I ever saw embody every single concept she was teaching,” a former student said. A colleague stated, “She is deeply committed to a welcoming, inclusive learning environment where all voices and perspectives are valued.”

Special appointments to chair positions: Terry Johnson, education, to the Marie and Robert Jackson Associate Professor of Education; Cindy Malone, English, to the John and Lois Welshons Professor of English.

Academic advising awards: Todd Johnson, physics; Mary Stenson, exercise science and sport studies. The Academic Adviser of the Year Award was established in 1985. It is awarded to two faculty and/or professional advisers who have distinctly contributed to the advising program, as well as to individual student development and growth throughout the academic year.

Alcuin and Clemens Library Information Literacy Award: J. Andrew Edwards, theology. This award was established in 2011-12, and is given to a faculty member who has “notably contributed” to promoting information literacy throughout the academic year.