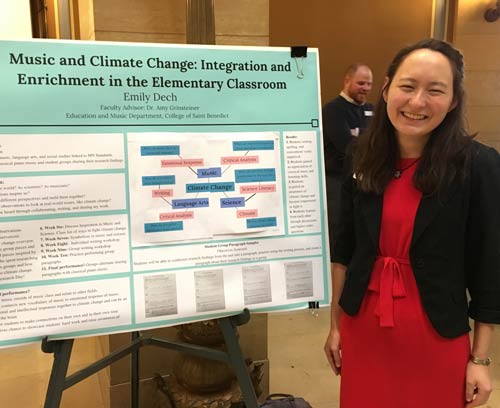 Emily Dech stands next to her poster at the Minnesota State Capitol. 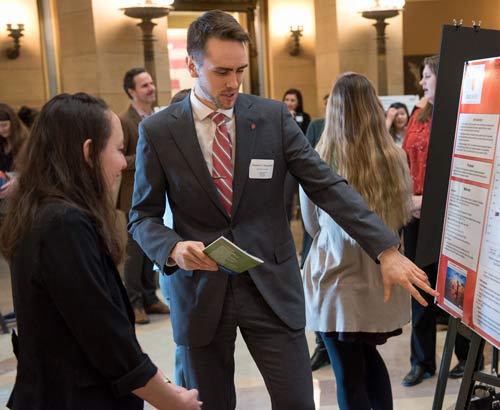 Matthew Burgstahler discusses his research at the Minnesota State Capitol. 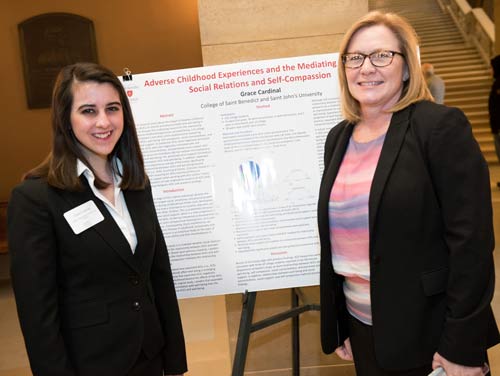 Grace Cardinal stands at her poster with Michelle Fischbach, Lieutenant Governor of Minnesota.

When the Minnesota State Capitol celebrated its Grand Reopening in August 2017 after four years of renovations, Gov. Mark Dayton called it the “People’s House.”

It certainly was the “People’s House” on Wednesday Feb. 21. The Minnesota Legislature was in session. Citizens were giving input and opinion to various committees. State employees scampered throughout the building.

Among all that hustle and bustle, three students from the College of Saint Benedict and Saint John’s University displayed their undergraduate research at the Scholars at the Capitol event, sponsored by the Minnesota Private College Council.

They found that the Capitol is truly the “People’s House” — and a great place to display their research.

“Being able to connect with other students and faculty outside of Saint Ben’s and Saint John’s through shared experiences is a unique opportunity – especially when there is no competition, just a celebration of shared success,” said Cardinal, who graduated from CSB with a degree in psychology and is now a preschool teacher in her hometown of Maplewood, Minnesota.

“Displaying my project at the Capitol was important to me because I had the opportunity to meet with legislators and advocate for the tangible need for the arts, science and creative freedom in the classroom,” said Dech, a senior majoring in elementary education from Red Wing, Minnesota.

“I am honored to be presenting at the Capitol and speak to legislators about how students spend their time in class and the idea of meditation being a thoughtful and evidence-based practice for reducing the stress and anxiety students feel in the classroom,” said Burgstahler, a senior majoring in integrative health science from Sandpoint, Idaho.

“ACEs are strongly tied to negative health outcomes in adulthood, such as cardiovascular disease, cancers, early death, smoking and broken bones, among others, as well as poor mental well-being,” Cardinal said. “Studying the research last summer, I was interested in why this correlation was so strong, and if there were any factors in the middle that explained the relationship.

“I integrated music, science, climate change and language arts in the classroom,” Dech said. “Students discovered elements of music, listened to classical pieces inspired by nature, researched these aspects of nature transformed due to climate change and wrote about their findings both individually and as a group.

“The project culminated in a joint performance in which students presented their research findings and I performed classical piano music by (Joseph) Haydn, (Claude) Debussy and (Ernő) Dohnányi,” Dech said.

Burgstahler studied to see what happens to healthcare students when they meditated to a guided meditation video of 5-12 minutes in length posted online six days a week for eight weeks.

“I had the students take pre-tests and express how stressed and anxious they felt,” Burgstahler said. “Students also came into the lab and I tested their heart rate variability, which means determining if their heart was in a relaxed state or a ‘mechanical’ and stressed rate. The students then did eight weeks of meditation and finally I had the students do the same testing procedures as before.

“I found that that the students that meditated more had less stress, less anxiety and were more mindful as they went about their daily lives,” he added.

The 30 research projects addressed disciplines ranging from philosophy to nursing, to chemistry to mechanical engineering and reflected the breadth of opportunities at Minnesota private colleges.