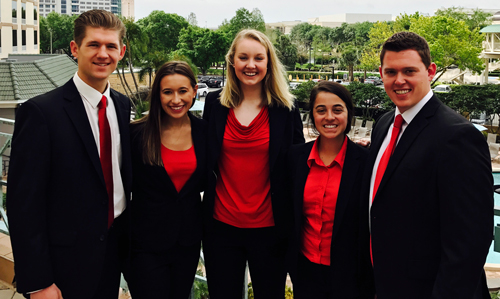 The five members of the College of Saint Benedict and Saint John’s University Society for the Advancement of Management (S.A.M.) Case Study team got some well-deserved celebration time on April 1 in Orlando, Florida.

They had plenty to cheer. The CSB/SJU team captured its fourth consecutive divisional title at the S.A.M. Case Study Research Competition.

“I think it’s cause for celebration, because they put a lot of work into it,” said Steve Schwarz, visiting assistant professor of global business leadership at CSB and SJU and the faculty adviser to the group. “This group met every day for about a month going into this. That’s not required by me, that’s just them saying we want to do the best job we can.

“I think the culture is such that no one wants to be the team that loses this, because they want to keep this streak going,” Schwarz said.

The CSB/SJU team was made up of five global business leadership majors and four seniors (Schmelz is a junior).

They had to answer the question, How can Facebook survive with an advertising model with ad blockers? Schwarz said that Facebook gets over 90 percent of its revenue from advertising, but more ads are being blocked by consumers.

“Their conclusion was they wanted Facebook to move toward diversifying their portfolio with some other models, and continuing what’s worked for them,” Schwarz said.

One of the team’s recommendations was for Facebook come up with a model that Spotify uses. With Spotify, you watch an ad that allows you to go ad-free for a certain amount of time.  The team found that 82 percent of the people on Spotify watched the ads to get ad-free time.

The other recommendation was to have Facebook get involved in online health care allowing a doctor to have consultation time with a patient.

The team made its recommendations during a 15-minute presentation March 31, followed by 10 minutes of questions.

The case was given to the team when they returned to campus in January, Schwarz can’t give direct advice, and the first time he saw the finished presentation was in Orlando.

Like any dominant team, there are several reasons why CSB and SJU students have won the competition.

Schwarz has the team conduct a practice case study in the fall. Then, when the group is ready, the team presents to a group of S.A.M. team graduates from previous years.

“They (the graduates) grill them, and put them through the ringer. They ask the questions that judges will ask, and they don’t hold anything back,” Schwarz said.

“The team learns from that. The Q and A is really the difference-maker. How well do you respond to the questions you’re not prepared for?”

Schwarz also thought the team is helped by the very nature of CSB and SJU.

“This competition is about strategy, thinking critically, presentation skills and working as a team. Those are all things in our major and in the liberal arts education,” Schwarz said. “And, I think it helps being a residential school. These students are able to get together more easily, and that’s probably different at some of the other schools they’re competing with.”