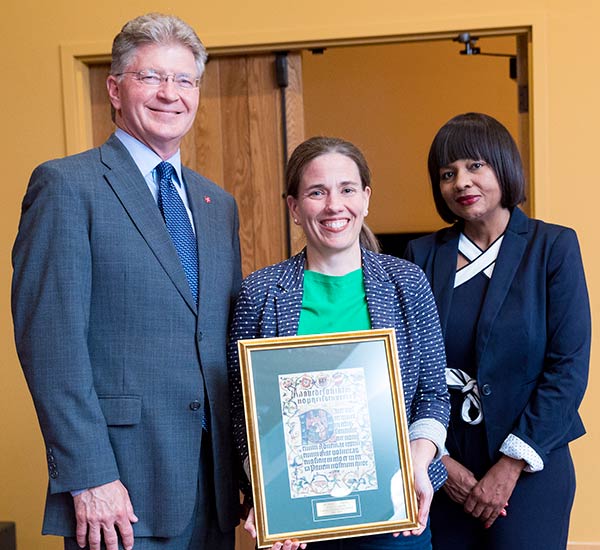 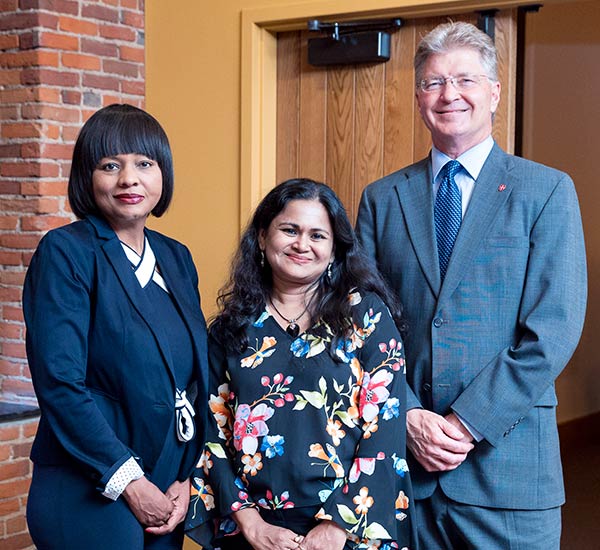 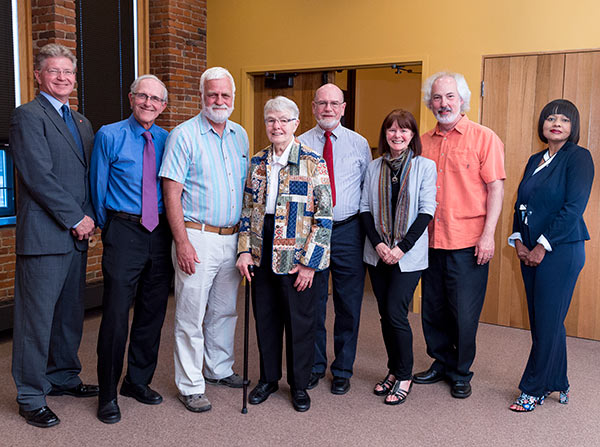 The 2017 faculty retirees with the presidents.

Two faculty members from the College of Saint Benedict and Saint John’s University received an early homework assignment for the 2017-18 school year during the final week of the 2016-17 academic calendar.

The winner of each award delivers the Convocation address at CSB and SJU at the beginning of the academic year. Grinsteiner will deliver the address at CSB and Colberg at SJU on Aug. 28 – the first day of the 2017-18 school year.

But we’re getting ahead of ourselves just a little bit. The Academic Affairs Awards Ceremony, held at the Founders Room, Quadrangle Building, SJU, recognized faculty for years of service, promotions and contributions as department chairs and leaders.

Grell, a noted biologist who was a 1933 graduate of CSB, served students at CSB and SJU for more than 35 years with intelligence, dedication and affection. Her lifetime of teaching at CSB is celebrated through the recognition of a faculty member who represents the best teaching and learning at CSB and SJU. S. Grell served as president of CSB from 1963-68. This award has been presented yearly since 1995.

Grinsteiner, who has taught at CSB and SJU since 2012, is a gifted and creative professor – as a pianist, studio instructor and in the classroom. She is also an active performance judge, performer, workshop convener and participant.

A colleague commented that “Amy is one of those special people who has the gift of both inspiring students and providing the details and structure to turn inspiration into accomplishment.”

One student, a non-music major, said it would be hard to imagine a liberal arts education without Grinsteiner’s instruction.

“It has proved one of my most difficult and valuable experiences at Saint John’s,” the student said.

Colleagues and students know Colberg, who has taught at CSB and SJU since 2011, as an outstanding teacher, adviser and scholar.

She has developed and revised eight different courses. Colberg helps students relate theology to other areas of knowledge, to skillfully communicate difficult ideas in accessible ways and inspire students to consider a major or minor in theology.

Colberg is also a dedicated adviser known to go beyond the call of duty for her student advisees. She makes the extra effort to meet with her advisees individually or in groups, and often has coffee gatherings after a guest speaker.

“Teaching is clearly a vocation to her and she pursues it with great competence and passion,” a colleague said of Colberg.

Mukherjee, who has taught at CSB and SJU since 2007, promotes gender education in economics and at the schools. She requires students to consider gender in economic analyses, which is a testimony to her commitment to the explicit study of gender that is the heart of the CSB and SJU mission.

“Her tireless effort and enthusiastic passion for gender education provides students with the opportunity to understand the role gender plays throughout the world,” a former student said.

Academic advising awards: Julie Lynch, communication; Elisheva Perelman, history. The Academic Adviser of the Year Award was established in 1985. It is awarded to two faculty and/or professional advisers who have distinctly contributed to the advising program, as well as to individual student development and growth throughout the academic year.

Alcuin and Clemens Library Information Literacy Award: Kate Kamakahi, instructor of first year seminar. This award was established in 2011-12, and is given to a faculty member who has “notably contributed” to promoting information literacy throughout the academic year.