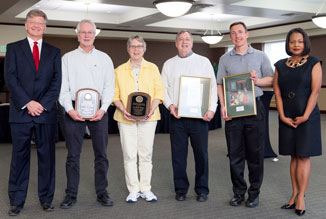 View a photo gallery of the May 2 event.

You didn't see faculty members from the College of Saint Benedict and Saint John's University dress up in their latest tuxedos or gowns from Donna Karan, Giorgio Armani or Calvin Klein on May 2.

But faculty members did come together for the Academic Affairs Awards and Recognition Ceremony. The ceremony, held at the Gorecki Center, CSB, recognized faculty for years of service, promotions and contributions as department chairs and leaders.

In addition, the following awards were presented:

Grell, a noted biologist who was a 1933 graduate of CSB, served students at CSB and SJU for more than 35 years with intelligence, dedication and affection. The difference S. Mary made in her lifetime of teaching at CSB is celebrated through the recognition of a faculty member who represents the best teaching and learning at CSB and SJU. S. Mary served as president of CSB from 1963-68. This award has been presented yearly since 1995.

Fischer, who began teaching at CSB and SJU in 2001, brings a substantial amount of experience to his position. Prior to joining the faculty, he worked as physical therapist for eight years. He has worked in the CSB athletic department as a strength and conditioning coach and as an assistant softball coach. Fischer has mentored 55 student research projects and moderated 23 internships as well as supporting student presentations at research conferences. Students praise Fischer for his ability to challenge and inspire students to think critically. "What makes Don an excellent professor, rather than just a good professor, is his ability to connect with students," a former student said. Fischer believes it is his responsibility to provide an overall learning experience that creates the possibility of each student being successful in the course.

This award is named in honor of Spaeth, who served as dean at SJU for nine years in addition to service as a professor of liberal studies from 1979 until his death in 1994. Each year, Spaeth's commitment to excellent teaching is remembered by honoring a faculty member who brings a special passion and mastery to the classroom and the learning community. This award has been presented yearly since 1995.

Students and colleagues praise Richardson, who has taught at CSB and SJU since 1984, for his intellect, his careful guidance of their research, his enthusiasm and his wit. He has inspired many of his students to pursue marvelous careers and lives. Richardson served as the Blecker Professor in Humanities from 2007-10, has served on faculty governance committees, has produced substantial publications and has spoken at numerous professional gatherings. He is "a teacher who clearly loves his subject, engages his students and encourages them to dig deeply into topics," said a former student who earned a doctorate in classics who went on to join a faculty of a college.

Saupe, who began teaching at CSB and SJU in 1981, has mentored 61 students across a wide range of topics. One of his colleagues stated that "it is impressive how Steve is able to attract students to the research on plants by making use of a variety of technologies." One student said that Saupe "exemplifies what CSB and SJU are all about, great faculty who allow students and professors to develop valuable professional relationships for a lifetime rather than a semester."

This award recognizes a member of the CSB and SJU faculty member who has contributed to students' gender education through curricular leadership, courses taught, scholarship and mentoring of students independent of normal classroom teaching. This person demonstrates leadership and fosters an atmosphere that encourages exploring gender issues from many angles. Kulzer, CSB's vice president for academic affairs from 1977-85 and a professor emerita of education who attended the ceremony, was a pioneer in the colleges' earliest efforts to integrate gender into the curriculum.

Nelson, who has taught at CSB and SJU since 1994, promotes gender equality in her classrooms and in the community. A former student of Sheila's stated, "Much of what I learned from Sheila as a student, came not from the lesson taught, but from who she was and how she approached the world around her." In her over 20 years at CSB and SJU, Nelson has been an exemplary advisor, mentor and teacher.  In the words of a colleague, Sheila "personifie(s) gender education."

Alcuin and Clemens Library Information Literacy Award: Yvette Piggush, assistant professor of English, received this award for the many ways she uses library resources and services to help her students. Piggush collaborates with the library for her first-year seminar classes, and her Honors 250 class on "Slave and "Neo-Slave Narratives." For the later course, she worked with a librarian and a member of Media Services to create scholarly editions of brief slave narratives that were collected in 1856, using Google Map to trace the route by which they escaped to Canada, and provide scholarly notes of explanation for themes touched on in the narratives. Puggish was selected to attend a Council of Independent Colleges Information Fluency conference focusing on research in the discipline of English and American literature.

Professor alumna, with special commendation for his many contributions in academic leadership: Chuck Villette, languages and cultures;