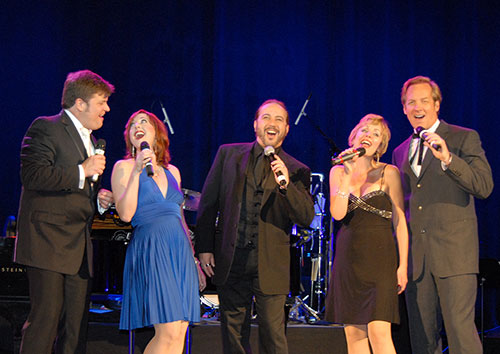 That’s the distance between the College of Saint Benedict and the Broadway theater district in New York City. It’s how far you’d have to travel to see the original stars in musicals like “The Phantom of the Opera” and “Les Misérables.”

Luckily, Broadway lovers won’t have to hop on a plane to hear music from their favorite shows. Neil Berg’s “100 Years of Broadway” will step onto the stage at 7:30 p.m. Saturday, Sept. 14 at Escher Auditorium, CSB.

It’s the opening performance of the 2019-20 Fine Arts Series, with 19 events scheduled through April 2020 at CSB and Saint John’s University.

Featuring music from some of the most popular Broadway sensations, a cast of glittering Broadway stars and a brilliant New York band, Berg has crafted a larger-than-life experience.

Berg, a Broadway composer, lyricist and producer, takes on the role of host and pianist in the show. He created and co-produces (along with Adam Friedson) “100 Years of Broadway,” which has been performed at over 100 venues a year.

“This revue features some of the best songs from the best Broadway shows, all sung by some of the most talented performers working today singing many of the hit songs that they have sung on Broadway,” said KABC Radio (San Francisco) critic Jerry Friedman about “100 Years of Broadway.”

Audience members can expect to hear selections from a wide range of Broadway favorites. Between “Les Misérables,” “Beauty and the Beast,” “Jekyll & Hyde,” “Chicago” and “Dreamgirls,” there’s something for everyone.

In fact, there’s even a spot in this show for those interested in stepping out of the audience and performing on stage. The night includes a Singing with the Broadway Stars competition (see sidebar). A public call for entries will happen in the weeks before the performance, with the winners featured on stage.

Don’t miss this historical walk down Broadway and the musical scores you’ve fallen in love with and requested again and again.

“100 Years of Broadway” is sponsored by Palmer Printing, Woodcrest and Coborn’s.