The bells ringing, the St. John's Boys Choir, Fr. Bob Koopman at the Abbey organ, Axel Theimer singing "O Holy Night", the smell of incense, and the warmth of community all greeted Kraig Windschitl on Christmas Eve his freshman year.

However, this was not how he imagined his Christmas would be. Windschitl, who graduated in 2000 from SJU, spent his Christmas' at SJU along with a few other friends and the monks.

While at SJU, Kraig had a part-time job at First Presbyterian Church in downtown St. Cloud as the part-time church organist. He would play on all the major feast days including Christmas. Since he made this commitment, he was not able to be with his family, at home on these special holidays.

Although this was a different place for Kraig to spend Christmas, it was surely one of his favorite experiences.

"The monastic community made me feel at home, especially the various faculty residents throughout my four years here", Kraig said.

Kraig double majored in liturgical music and organ performance and minored in theology at SJU.

"I wanted the sacred, historical, and performance aspects of music study. This was the perfect place for it," Kraig said.

He was born in New Ulm, MN. His mother, Joanne, was the organist and music director at Holy Trinity Cathedral in New Ulm, Kraig's home parish. Since he was a child, Kraig would sit next to the organ bench in the choir loft while his mother practiced the pipe organ.

"It never occurred to me that I would do anything else other than play the organ," Kraig said.

He came to SJU because of the music program and the intricate one-on-one sessions with the faculty. Kim Kasling, professor of music at the College of Saint Benedict and Saint John's University, helped Kraig to improve his organ/church music skills at SJU.

"Dr. Kasling and I still talk often, in fact I try to fit in a lesson with him when schedule permits. He is not only my teacher, but my mentor, colleague and friend," Kraig said.

Kraig was involved in Campus Ministry at CSB as a student organist/cantor and in the St. John's Men's Chorus as well.

After graduating from SJU, Kraig attended the Jacobs School of Music at Indiana University, Bloomington, Ind. receiving a master of music in organ performance and sacred music.

"Graduate school wasn't the same. I felt much more connected at St. John's and I always will," Kraig said.

Today, he is the senior organist at Mount Olivet Lutheran Church in Minneapolis, with over 13,000 members it is known as the largest Lutheran congregation in North America. Every Sunday at the organ bench, Kraig plays all four services as well as the large capacity of weddings and funerals. Kraig also teaches organ at the Mount Olivet School of Music, a ministry outreach of the church.

"Teaching is a way to give back to the rich musical community which is so important for young people. Music is the universal language, it's no wonder it so often brings us together, giving us such a sense of community," Kraig said.

A highlight for Kraig was returning to SJU to serve as adjunct organ faculty, spring of 2007 while former teacher Kasling was away on sabbatical.

SJU has certainly prepared him for what the future holds for him.

"Without the monks, students and faculty, I would not be the person I am today," Kraig said.

He offered this advice to undergraduate students attending CSB and SJU.

"Think of yourself as a sponge, learn and experience as much as you possibly can," Kraig said. 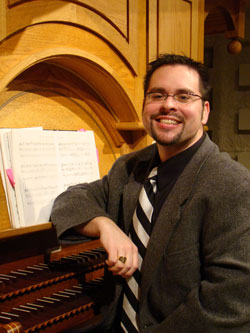