Professor Samuel Holmberg is the Adjunct Instructor of Organ at the College of Saint Benedict and Saint John’s University in Collegeville, Minnesota. He is also the Principal Organist at The Basilica of Saint Mary in downtown Minneapolis, where he directs the Missa Choralis Series and Chorus Cantorum. He serves on the executive board of the Twin Cities chapter of the American Guild of Organists (TCAGO).

Holmberg has previously held positions as the Diocesan and Cathedral Director of Sacred Music at St. Peter Cathedral in Marquette, Michigan, and as the Sacred Music Intern at the Cathedral of St. Paul in St. Paul, Minnesota. A graduate of the Eastman School of Music and Luther College, he holds degrees in organ performance, literature and sacred music. His organ teachers include David Higgs, William Porter, Gregory Peterson and Lynn Trapp. He studied improvisation and repertoire with visiting Professors Michel Bouvard (Paris Conservatoire) and Edoardo Bellotti (Conservatories of Trento, Italy and Trossingen, Germany). He is a former co-chair of the Eastman Rochester Organ Initiative (EROI), a global center for organ performance, research, building and preservation. Further study was in a program for select undergraduate students at the Yale School of Music and Institute of Sacred Music.

Holmberg has recorded for Minnesota Public Radio in solo and ensemble roles and has been featured on Pipedreams, a radio program supporting the art in sacred and concert venues. He has given the world premiere of several newly commissioned works, including works by Stephen Paulus, Philip Moore and David Briggs. He holds memberships with the Conference of Roman Catholic Cathedral Musicians (CRCCM), the American Guild of Organists (AGO), and the North American Branch of the Herbert Howells Society. 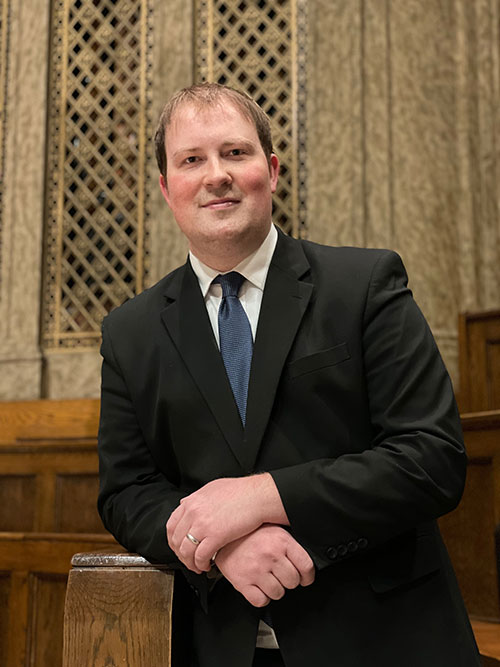