Harpist Rachel Brandwein is the Winner of the 2014 Mu Phi Epsilon International Solo Competition. From 2014-2016 she is under management as Concert Artist and is performing throughout the United States.

Rachel is Adjunct Faculty in Music at Luther College, Adjunct Assistant Professor of Harp at the College of Saint Benedict & Saint John's University, and also teaches at Mount Calvary Academy of Music. Among her performance and composition accomplishments are first prizes and grants in numerous regional and national competitions sponsored by the American Harp Society and the American String Teachers Association, as well as Mu Phi Epsilon.

A featured soloist at the Ninth World Harp Congress in Dublin, Ireland, Rachel also toured China with the Juilliard Orchestra. Since moving from New York to Minneapolis in the fall of 2012, she has performed with the Minnesota Orchestra and VocalEssence. In the fall of 2013, Rachel embarked on a nine state, fifteen concert tour with Trio Matisse (flute, harp, cello) as part of the Allied Concert Services Tours and is continuing to perform with the trio. She enjoys giving recitals of original and arranged works with her trombone partner, Dr. David Peterson, as the Branderson Duo. They were awarded a grant from the Minnesota State Arts Board and in 2015 will premiere a commissioned work by Dr. Paul Salerni.

By invitation from The American Harp Society Rachel performed a full recital of her own music at the 2014 National Conference in New Orleans. She has presented her works on the Composer's Concerts at The Juilliard School and at Stony Brook University's Composer Concert Recital Series. In addition, her compositions have been performed at the University of Michigan, University of Minnesota, Kansas State University, and at Interlochen Center for the Arts where Rachel serves on the harp faculty for the summer camp programs.

Rachel earned degrees from the University of Michigan (BM), The Juilliard School (MM), and Stony Brook University (DMA). She studied harp and French for one year in Paris and Lyon, France. After performing at her doctoral commencement, Rachel was awarded the prestigious Ackerman Award for Excellence in Graduate Studies for "excellence in performance and pedagogy". Rachel's goal as a teacher is to help each student appreciate and fulfill his or her artistic potential with confidence, creativity, and dedication. 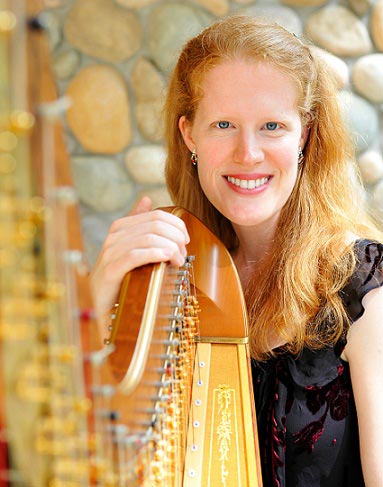