About the Men's Chorus 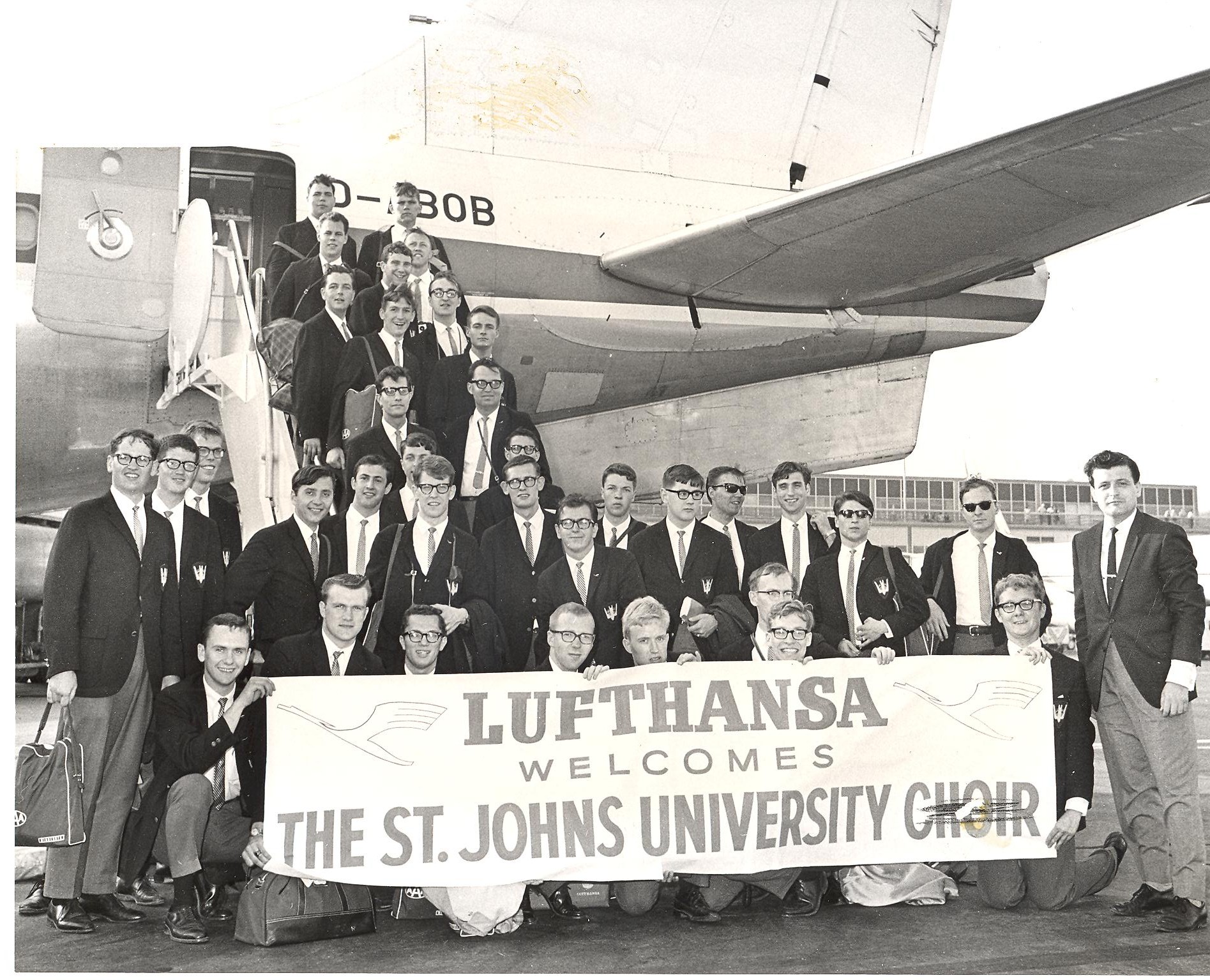 The Saint John's University Men's Chorus was organized by Fr. Bartholomew Sayles, OSB of the Saint John's Abbey in 1948. Fr. James Kelly, OSB conducted the choir until 1958 and Gerhard Track until 1969, when Axel Theimer, the present director, joined the music faculty at St. John's University and the College of St. Benedict. Until 1960, annual tours concentrated mainly on Minnesota and the surrounding states. In 1960, the choir made the first of many trips to Europe. The majority of performances, however, are still scheduled in the north central states.

Every 4 or 5 years singers of the Men’s Chorus have the opportunity to join members of the CSB/SJU Chamber Choir and the CSB Women’s Choir to travel abroad. They toured Europe in 1980, 1985, 1992, 1997, 2001, 2010 and 2015 presenting concerts in Austria, Belgium, Germany, Holland, Hungary and the Czech Republic. In May 2005 members of this choir joined other singers at CSB/SJU on a 23-day concert tour to Asia. The choir (CSB/SJU Choral Arts Ensemble) performed concerts and was part of several choral festivals and seminars in Tokyo, Okinawa, Seoul, Beijing and Hong Kong, including a performance which was part of the "Welcome to Beijing' Fine Arts Festival.

The next international tour is scheduled for May of 2018 when current singers of the Men’s Chorus (together with members of the Chamber Choir and Women’s Choir) return to Germany, the Czech Republic and Austria for a three - week concert tour.

The SJU Men's Chorus performs frequently for state and regional music conventions and,  throughout its history, has received numerous international prizes and awards - including first places at the International Music Eisteddod in Llangolen - and appeared regularly on regional and national broadcasts, such as Great Choirs of America and Voice of America.  Past highlights include joining the Minnesota Chorale for the MN Orchestra’s performances of  Arnold Schoenberg's Gurrelieder, participation in the United States’ premiere performances of John Tavener's Akathist of Thanksgiving, Petr Eben's monumental oratorio "Anno Domini" and sharing the stage with Minnesota’s award winning Great Northern Union (Barbershop) Choir.

Traditionally the year begins with singing for the University's Opening Convocation and getting the 'home-crowd' excited at all the home football games, continues with  the annual Christmas at Saint John's concerts and Celebrate the Season CSB/SJU's traditional Christmas concert at the Basilica of Saint Mary in Minneapolis and joins its voices with Chamber Choir and Women’s Choir in the annual Choral Masterworks concert in April, which, over the last few years featured major choral works such as Brahms’ Ein Deutsches Requiem, Mendelssohn’s Elijah, Faure’s Requiem, Haydn’s Creation and, in the Spring of 2018, Glenn Burleigh’s Alpha Mass.

The singers of the choir represent a wide variety of musical background, talent and choral experience. What brings us all together is the love for singing, making music with others and the special camaraderie, which is such an important part of ensembles. Students are encouraged to join choirs in their first year at St. John's /St. Ben's and, time and schedule permitting, remain in the choir throughout their college years. 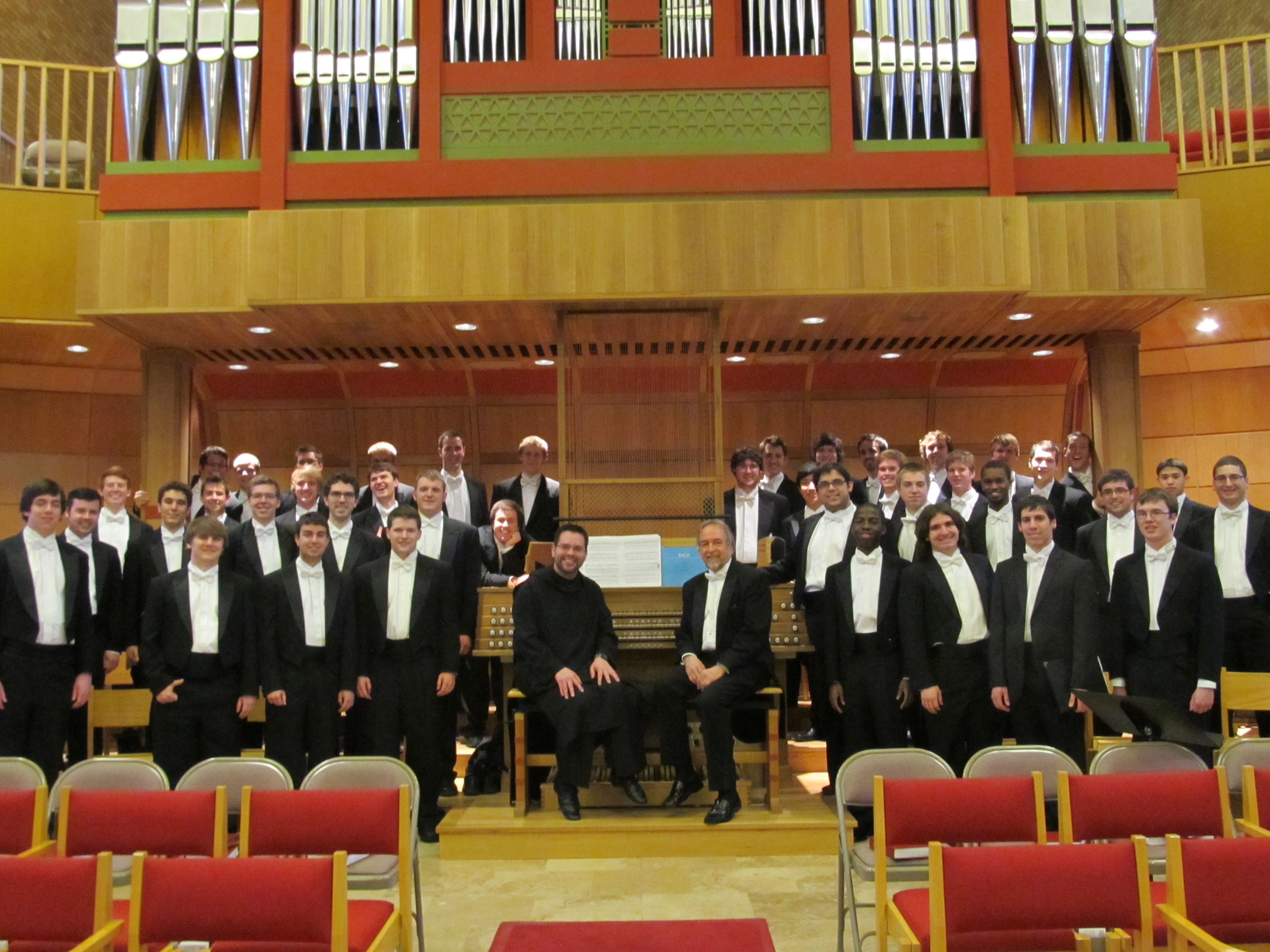 Auditions are held every fall, at the beginning of a new academic year, and are open to all students, First Year to Senior.   Previous choral experience is not necessary. The students of the Saint John's University Men's Chorus represent a wide variety of musical background, talent, and choral experience. In general, students join in the first year at Saint John's and are encouraged, time and schedule permitting, to remain in the choir throughout their college years.